Chicago rap star Lil Durk is thankful for his boo India Royale. The king of the trenches has seriously blessed his boo up for her birthday with some major drip. Lil Durk Honors The Woman Who Saved Him

Lil Durk completely iced out India Royale on her special day. He copped her some new chains featuring images of the pair boo’d as well as their two kids they’ve had together. In a now-deleted post, Lil Durk took to social media to credit her with saving his life and show mad love.

“Happy birthday to the female that saved my life when I was at my lowest point I love you 4eva – ms smurk,” The hip-hop star is churning out new music like a factory. Following the success of his Billboard chart-topping The Voice album, the Grammy-nominated artist released his new Loyal Bros compilation studio project last week. The Loyal Bros compilation album treats fans with a great mix of new music from the OTF crew. The LP includes tracks from members like Booka600, Memo600, Timo, DoodieLo and even the late King Von.

Crowning Himself As Chicago’s JAY-Z 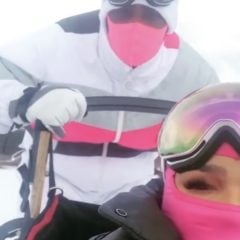