Florida rapper Kodak Black wants credit where it’s due. He went to social media to voice his frustrations with rap star Megan Thee Stallion and let it be known he wants props for making her career. Kodak has been claiming Megan’s “drive the boat” phrase was started by him for months, but she’s refused to acknowledge him at all and says she came up with it on a whim after downing a few shots. He took to Twitter this week to put some respect on his name and went as far as essentially saying he made her career. 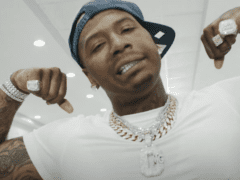 NEWSMoneybagg Yo Has A Big Fan In Pharrell

Yak and hip-hop rookie Pooh Shiesty are at each other’s throats. They’ve both gone online to trade shots back and forth over accusations of copying some swag. Kodak originally accused Pooh Shiesty and Atlanta star Lil Baby of stealing his style and his trend of flashing money online. Pooh responded with a handful of throwback pics, giving credit to Chief Keef if it was due to anybody and showing that he did it way before Kodak took to social media with the flexing trend.

The Green Light To Keep Grinding

Yak is one step closer to being a completely free man. Recently released from prison, KB was granted approval to travel — for work purposes only — by a federal judge earlier in the month. Kodak Black’s presidential pardon from Donald Trump doesn’t mean total freedom for the chart-topping star. KB still has to check in with a probation officer, but now he’s been approved to travel for work if he provides a full itinerary — including where he’ll be staying on the road.