Rapper Danny Brown has been making moves in the podcast world lately, even trying his hand at comedy. Nevertheless, fans are reminiscing on the 2013 shocking incident that found him on stage unzipped in the hands of a groupie./ 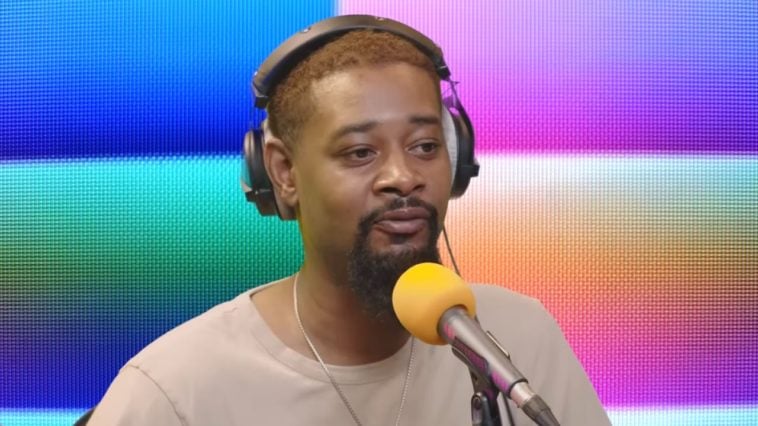 99 Views
Comments Off on Danny Brown Unzips 2013 On-Stage Groupie Incident: “I Didn’t Really Know What Was Going On Until It Was Too Late”

Rapper Danny Brown has created his own lane with his YouTube show, The Danny Brown Show, and even tried his hand at comedy.  In his latest episode, he recently shared some of his experiences with fans, including when he was once included in a Rolling Loud poll that asked fans who they would like to see perform. So it came as no surprise that fans are reminiscing on his wild 2013 onstage moment when he was caught with his pants unzipped at the hands of a groupie.

The Midwest rapper came clean on what really went down during the 2013 concert when a groupie went down on him in front of a live audience.

According to Brown, the incident was not staged, and he promised he would not press charges if the act turns out to be illegal.

“I don’t know, maybe I had my d**k sucked a lot and I didn’t really understand what was going on because I was working, I was doing my job, so I didn’t really know what was going on until it was too late,” Brown explained. “I don’t know. I think it’s legal, I ain’t pressing no charges. [Did I finish?] No, no, no. No, I kept my composure. I did my thing. Yeah, I was working. To be honest, I be so zoned out while I’m rapping I don’t know what’s going on. Somebody could smack me and I probably wouldn’t even know.” (Shade 45)

Back in May 2013, Brown’s pal Kitty inked a full-fledged blog post rant and firmly stood behind Danny in light of the widespread chatter about what went down.

“It’s obvious that the reason nobody cares is because a girl did it to a boy. I said this on my blog, but I’ll say it again here–I had my pants ripped off onstage, and didn’t know what to do either because being naked in front of 1000 people is incredibly scary and there’s not much quick decision-making happening in your brain during that sort of thing. Now I’m prepared to kick a motherfucker in the teeth if he touches me at all, and I equip myself with giant boots for that reason. What is Danny supposed to do? The girl was at mouth-to-dick level already and to push her away, he would’ve had to either pushed her face or kicked her, and even the most gentle of either motion would immediately be labeled “abuse” by anyone watching. Guys pushing girls is not a good look when people are taking photos. So what was Danny supposed to do, other than back away, which he did? And if he had figured out a way to gently push the girl off him immediately without looking like he was smacking her in the face, he’s faced with attacks on his masculinity by every douchebro in the building. Yo dude, you don’t want your dick sucked, bro? Are you gay? Haha you’re gay you don’t want girls to suck your dick haha gay dude bro man swag! And that’s a rapper’s literal nightmare. [sic]” (Vice)

She also killed the notion that Brown is the guilty one.

“So now we all sit in this van and play videogames and check our Twitter mentions and don’t speak at all of “The Thing,” because it’s all we’re thinking about and it’s very lame. First of all, accusing me of being jealous is hilarious, because I’m like getting married and whatever. Also I have no qualms with sluts. I love sluts. I’d walk a slut walk if I liked my body enough. Also, does Minnesota really have that little going on that this is the biggest headline they have? The answer is yes, but even so, why doesn’t Ricky Smiley or whoever just talk to this girl? I know why. It’s because everyone wants the option of blaming it on Danny, because people can’t accept the fact that a white girl raped a black dude in front of a bunch of people. We all read To Kill a Mockingbird, and if we didn’t read it we at least read the SparkNotes, so unfortunately I’m sure this girl will never be brought to justice anywhere besides my stupid Tumblr. But to watch my best friend go through this weird racist/sexist sensationalism is 1% exciting and 99% heartbreaking, and I feel like actual Scout Finch at the moment so I will leave you with this statement: I am a small white girl who does have society’s permission to at least attempt to kick the shit out of you. [sic]” (Vice)

Earlier that week, the alleged female responsible for blowing Danny away spoke out.

Now that you are up to speed, lets get back up to speed. It would seem like the chick that gave Danny Brown the experience of a lifetime is talking! At least on the internet. But chatting cannot be verified very easily. I am going to paraphrase what she said, because its very pause worthy. Basically she talks about dudes johnson quite a bit – that is was larger than the white boys she is generally with. That she sleeps with a lot of people and feels basically liberated as a woman. Promiscuous sex doesn’t determine your worth or how good you are, she maintained. She also said that Danny likes mostly White girls and that’s something he says a lot in his lyrics. I think Danny is colorful, but I don’t listen to the music that much. I don’t know. This could be pure BS. I really can’t imagine anybody owning up to sucking Danny Boy off live on stage. (All Hip Hop Rumors)

Have you picked up the new Big Sean album? Check out SOHH’s Top 5 Reasons why you need the Hall of Fame LP right now!