Vixen Denise Bidot isn’t losing any sleep or hiding as Lil Wayne breakup rumors continue to dominate the Internet. The popular model goes online to show she’s sticking to her work grind instead of caving into the Weezy F. Baby gossip.

Bidot has lit up her Instagram page with fresh shots of herself solo and confident. Denise proves she’s staying booked and busy these days amid marital status speculation. This week’s new rumors of Lil Wayne and Denise Bidot breaking up sparked when fans noticed the couple were no longer following each other on Instagram. Then, Denise posted a cryptic message on her IG Story. 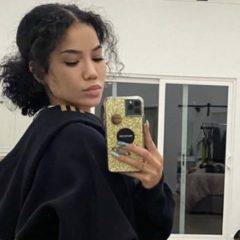 Back in November, Denise Bidot gained a lot of new fans when she reportedly broke up with Lil Wayne due to his President Donald Trump endorsement. The couple later reconnected.

Denise’s Instagram page previously faded to black. The IG account which featured tons of pics of Bidot boo’d up alongside Weezy F. Baby temporarily went offline and the Internet suggested this proved their relationship crumbled.