New York rapper Tekashi 6ix9ine has to pay up. The “ZAZA” hitmaker has reportedly been sued by a round-the-clock armed security company whose services he used back in November 2018 for 11 days. 6ix9ine Is Being Sued By Metropolitan Patrol

Metropolitan Patrol is asking 6ix9ine cough up a total of $88,000. Of that number, $75K goes towards their actual costs of securty while the remaining money is from late fees and legal costs. The company provided him with fully-loaded Yukon featuring ballistic panels as well as a pair police-style Ford Explorers complete with lights and sirens, per their invoice. Security costs $85 per hour with late-night shifts going up to $127.50.

6ix9ine’s lawyer, Lance Lazzaro, tells TMZ … Tekashi’s booking agency at the time, MTA Bookings, is responsible for covering the tab, and that Metropolitan’s beef is really with them. He says Tekashi has nothing to do with it, and owes nothing … calling the suit “meritless.” (TMZ) 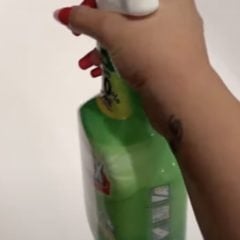 WATCHCardi B Cleaning Her Bathtub Will Make You Laugh + Smile

The infamous snitch is feeling extra good about his music these days. The hip-hop star has celebrated his recently released “ZAZA” single landing on the Billboard Hot 100 chart by trolling his rap rival Meek Mill. On Monday, 6ix9ine remained relentless on attacking Meek – digitally. Tekashi even joked about Mill also feeling like he should celebrate hitting No. 90 on the music chart courtesy of his forced cameo in the “ZAZA” music video. Polo G Confirms His ‘Hall of Fame’ Album Is Complete