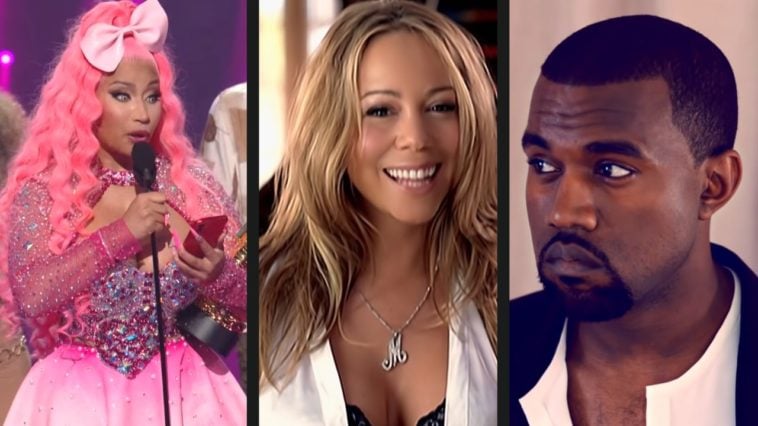 Nicki couldn’t wait to accept her Vanguard award and share her star-studded speech from her phone.

During the speech, she thanked those who gave her opportunities, including Rihanna, Beyoncè, Madonna, Eminem, and Britney Spears.

As a surprise to some, Yè and Mariah Carey were also on the list.

The R&B and rap divas’ feud started when Mariah and Nicki appeared as judges on season 12 of American Idol.

Multiple sources say the two had verbal altercations and Nicki even “threatened” to shoot Mariah with a gun.

Nicki even went to Twitter during that time to air her frustrations.

“All I do is compliment u. That’s not enuff? Ur a legend, cheer up,” Nicki posted. “U don’t have to run down ur resume or feel intimidated. Shady McGrady.”

However, multiple producers on the show denied the allegations and said that all the judges were invested in the show.

Nicki and Ye’s beef is a little more recent. During Nicki’s set at Essence festival this past July, the DJ played their track “Monster” right before she cut it short.

She also says she doesn’t mess with “clowns,” which had the crowd assuming she was talking about Yè.

Her acceptance speech could just be her way of publicly amending the beef that is being speculated about.

So far, Kanye and Mariah have not made any comment yet.

Nicki Minaj surprised fans with a new album that features some of the greatest hits she made throughout her career.