The ladies mentioned this week dominate the game in music, fashion, and film–giving us new projects to enjoy over the long weekend. 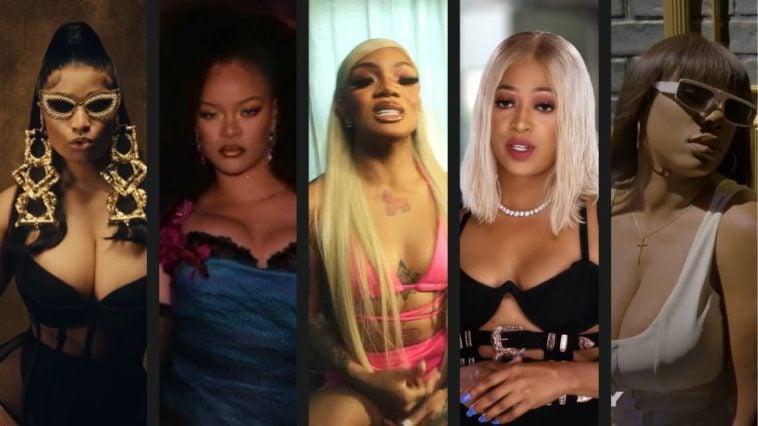 In her recent cover with I-D Magazine, Nicki Minaj opened up to The City Girl’s JT about losing her connection to her hip-hop fans early in her career after making a slight transition to the Pop genre. Foxy Brown being her biggest inspiration for her rap style, her highly-anticipated fifth studio album could drop soon, and a new nail design company selling press on nails! The Queen is also rumored to Perform alongside pop singer at the FIFA World Cup in Qatar.

Riri continues to dominate the fashion industry with her unique style and looks. The billionaire bad gal took it a step further in her recent Savage X Fenty fashion show to showcase new styles from her lingerie line.

Memphis rapper GloRilla sent social media into a frenzy with her hit track “FNF” later taking to the music scene by storm with follow-up hits “Tomorrow” and “Blessed.”  The wait is finally over as Glo is set to release her highly-anticipated EP Anyways, Life’s Great this Friday (11/11), fans are more than ready for the release; Let’s Go!!!!!

Trina is planning to celebrate her birthday in style with fans and family. The I Am Hip-Hop Award recipient announced that the first annual Rockstarr Music Festival is set to take place in Miami on December 3rd.

The festival will include live musical performances, giveaways, and games for all ages!

After opening up about life after Nipsey, Lauren London has been making major success moves. Her recent project is a collaboration with PUMA, presenting her new apparel and sneaker collection titled L.A. Love Story.

This collection includes sneakers, sweatsuits, and slides. L.A. Love Story is “about love–love of self, love of your roots, love for the lessons that shaped you.”

Grammy-nominated songwriter Brittany B, also known as Bee-B, has outdone herself once again. The Compton artist is set to release her new album Ghetto Feng Shui this Friday (11/11), and fans cannot wait to hear what the Hood Hippie has in store. The project is set to include tracks like “Self Care,” “GHETTO,” and the hit track “Can We” featuring Raheem Devaughn.

Iconic actress and civil rights activist Lena Horne becomes the first black woman to have a Broadway theater named after her. The historic Brooks Atkinson Theater in New York City has officially been renamed the Lena Horne Theater in honor of the trail-blazing Broadway actor!