NYFW (New York Fashion Week) 2022 came, saw, and conquered the Big Apple, and SOHH has curated the top killer fashion looks rocked by artists who shut it down, such as Kanye West, Latto, Lil Nas X, and more. 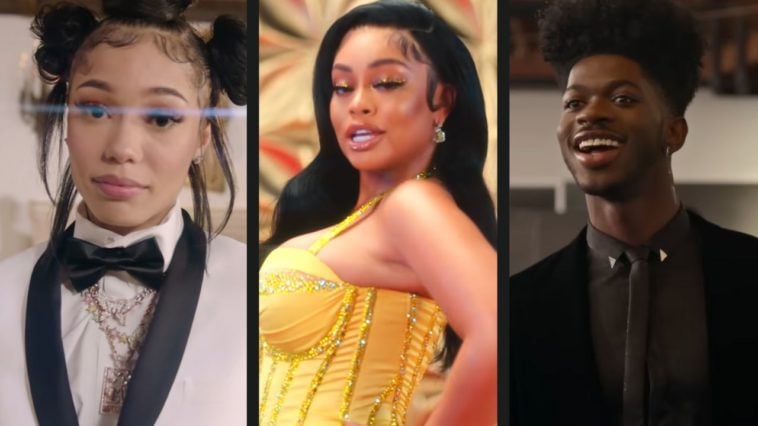 Find out who’s “giving yes” with the most trendy and creative celebrity styles to hit up NYC for the eventful week.

The “BOOTY” hitmaker has been strutting in edgy styles this week. He recently stepped out with model Christine Quinn, rocking a Christopher John Rogers neon green coat paired with a matching bag, glasses, and Balenciaga kicks.

The “Big Purr” artist may not be in her acting bag yet, but she kept it cute and boss-like in a full Coach ensemble. With high socks, platform loafers, and a mini plaid bag, this girl is decked out in “Fly Shit.”

Our girl Big Latto brought us fashion in her Fe Noel dress. Brooklyn designer Felisha Noel created a multi-colored ombre body-hugging dress with a matching jacket and detailed puff white sleeves. Latto’s hair was up in a dangling high pony as she carried her light pink nails and face beat for the gods.

Ye turned heads as he hit the show in a black leather jacket and pants combo with massive brown-colored Yeezy boots and a brown hoodie. The ensemble’s designer is unknown as Kanye was the last to show up, but that’s normal!

The “Call Me By Your Name” artist showed up to a function decked out in Coach. After performing at Vogue World, he served his best “cool kid” pose in his metallic button-up jacket, flare pants, and sparkling net crop top. He wore a black leather, oversized modern-day motorcycle jacket with large pockets.

Speaking of Lil Nas X and Saucy Santana, the two recently teased fans with the performance of an unreleased single.

In March, the “Old Town Road” artist also hinted that he had a new song on the way with Saucy, along with his BET diss track “Late To Da Party” featuring NBA YoungBoy.