Former SOURCE Magazine owner  Benzino recently decided to end his mostly one-sided beef with Eminem after nearly two decades.  By taking on Eminem, Benzino thought he was protecting Hip-Hop culture from a whitewash.   Here are 5 reasons why Benzino was wrong about rap’s most divisive white boy. 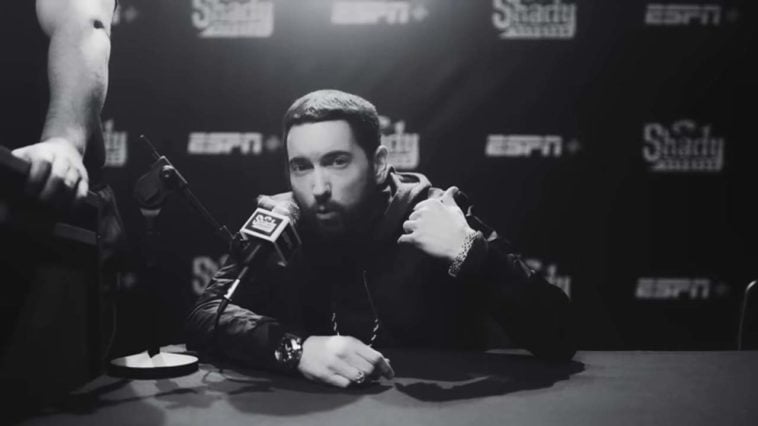 264 Views
Comments Off on Eminem Is Important To The Culture Of Hip-Hop & Black Resistance.  Here Are 5 Moments That Prove It

On March 17th, Benzino took to Twitter to announce he is officially done beefing with Eminem. He also made sure to appreciate the consistent efforts that Eminem has made for Hip-Hop culture.

In his Twitter message, Benzino stated “To all @Eminem fans & Stans all over the world, the beef is officially over. I’m letting y’all know I have no hate towards any of his fans & recognize his contributions to Hip Hop. He truly is a part of the culture & 1 of the best to rock the mic regardless of his color.

Benzino continued by saying  “This is truly over. God Bless All. I’m falling back from Twitter for a while but when I come back you will see a different Benzino…

Benzino’s obsession with tearing down Eminem lasted over two decades beginning back in 2002 when Eminem complained about receiving 4 out of 5 mics in The SOURCE and feeling he could never achieve 5 mics because of his race. At the time, the magazine was the definitive bible of “HIp-Hop culture, news and politics” – the mic ratings could make or break an artists’ career.

For most of the beef’s existence it’s been mostly one-sided, but Em did address Benzino and The Source on diss records like “Invasion”, `The Sauce”, and the more popular “Nail In The Coffin”.

Eminem’s white privilege, which even he acknowledges in the world of hip hop and the music industry should be discussed and recognized.  However, his contributions and legacy in hip hop culture should not be ignored.

Eminem is often compared to singer Elvis Presley, often-times as a back-handed compliment to paint him as a “culture vulture.”  However, the one contribution they both made to  black music is their ability to broaden its appeal to white fans.   But what separates Eminem from Elvis is Em’s reverence, protection, and respect for black people and black culture.

Here are 5 instances when Eminem went above and beyond as an ally to the culture.

1. Eminem participated in the blackout in 2020.

During the wake of the George Floyd murder Eminem wanted to make a difference. The hip-hop superstar stepped up to announce his involvement in pushing for racial justice and ending inequality by observing Black Out Tuesday – a collective day of action to protest perceived racism and police brutality.  Businesses taking part were encouraged to abstain from releasing music and participating in other business operations.  On June 2, 2020, Eminem shut down all his businesses and Shady Records in solidarity. On his Instagram, he stated “We will be closed on Black Out Tuesday.  Join us in fighting for change. #TheShowMustBePaused #BlackLivesMatter #BlackOutTuesday”

In 2018, with the release of the epic theatrical event, Black Panther, the film that was critical in changing the landscape of imaging of Black people traditionally in Hollywood.   Eminem showed he was for the culture by helping to send 900 mostly black students in his hometown of Detroit to view the film for free.

3. Eminem acknowledges the legacy of Black American music and his place as a guest of hip hop

In 2020, Brand Nubian’s Lord Jamar, stated that all white rappers are guests in the house of hip-hop. Eminem was interviewed on Crook’s Corner  and shared how he felt about the concept of white rappers being guests in the house of hip-hop. Eminem replied, “I’ve never said I wasn’t a guest, I absolutely am. I care more about the craft than any of that other s**t”.

When sharing the biggest stage in the world with Dr. Dre, Snoop, 50 Cent, Mary J. Blige and Kendrick Lamar, Eminem took the opportunity to show his solidarity with the Black struggle for social justice.   At the close of his performance, Em “took a knee” to close the show and his solidarity with activist and former NFL quarterback Colin Kaepernick.

The most effective way to be an ally to the black community as a non-black person is to use the privilege that you have to combat racism.  Eminem took on Donald Trump, his supporters, and even any fans of his own who may be split on their decision to support Trump.

In some of his most heartfelt bars of the freestyle, Eminem rapped, “Any fan of mine, who’s a supporter of his/ I’m drawing in the sand a line, you’re either for or against/ And if you can’t decide, who you like more and you’re split/on who you should stand beside, i’ll do it for you with this/ F**k You! Hit-Boy and Dom Kennedy Link Up For New Track, “Corsa”