Hip-hop is one of the most dominant music genres, and many rappers continue to score substantial amounts of streams every day. Here are the top 10 rappers with the most streams in 2022 so far. 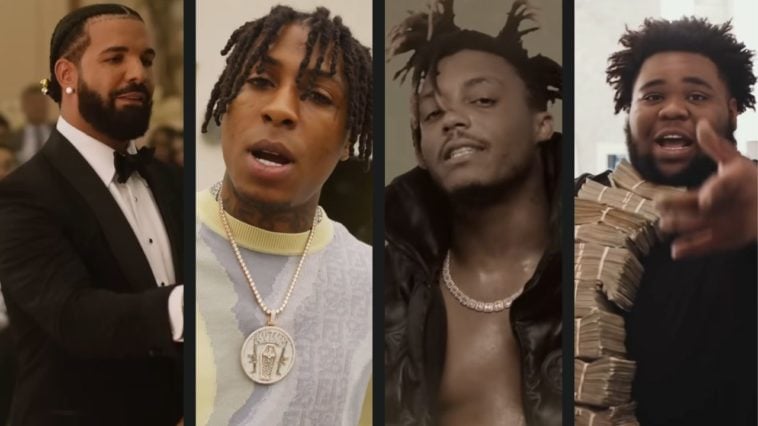 199 Views
Comments Off on Drake, NBA YoungBoy, Lil Baby, + More Make The Top 10 List Of Most Streamed Rappers Of 2022

From Drake to Eminem, rappers have been reeling in streams for years and continue to rise. Here are the top 10 most streamed artists of 2022 so far:

Drake is at the top of the list after dropping Honestly, Nevermind,  and all of his albums have reached No.1 on the Billboard 200. Drake is one of two artists to have five billion streams this year, and has broken Billboard records as well with the most top 20 hits on the Hot 100.

NBA YoungBoy, who recently dropped his album The Last Slimeto, sits second on the list and joins Drake as one of the only artists to have five billion streams this year.

Juice WRLD, the late Chicago rapper, sits third on the list even two years after his death. His dedicated fanbase is still steaming his music heavily.

Kanye is fourth on the list and his recent album Donda comes after a lot of hype leading up to its release.

Future is fifth on the list. However, the Atlanta rapper has not dropped an album this year, but is still dropping new music before his next album drops.

Lil Durk’s last album, 7220, and his Signed To The Streets series are keeping him afloat in the top 10.

Eminem also made the top 10 list. The Detroit rap veteran is still among the highest-selling artists in the 21st century. His album Curtain Calls 2 will only help his numbers rise.

Kendrick Lamar made eighth on the list after dropping his album Mr.Morale and The Big Steppers in June after a five-year hiatus.

Lil Baby comes in at ninth and released his album It’s Only Me earlier this month to further help his streams for the year.

Post Malone is tenth on the list. The “White Iverson ” rapper released his album Twelve Carat Toothache earlier this year, but plans to increase streams with his upcoming tour with Roddy Ricch.

Rap superstar Drake has broken many records in his career regarding sales, but reached a rare milestone.

“Drake is the first artist in history to earn 100 top 20 hits on Billboard and surpassed the Beatles for most  top 5 hits in Billboard Hot 100 history with 30.”

Since Drake’s debut album Thank Me Later was released in 2010, all seven of his albums have reached No.1 on the Billboard Hot 100 charts, with his latest being Honestly, Nevermind.