Drake and 21 Savage recently announced a joint album titled Her Loss. Here are four songs that lead to the highly-anticipated collaboration. 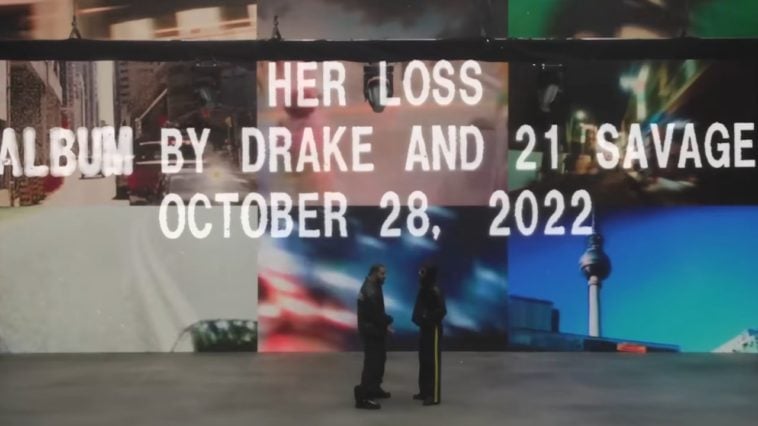 169 Views
Comments Off on Drake & 21 Savage “Her Loss” Album: Songs That Lead To The Collaboration

21 Savage and Drake have announced that they will be dropping a joint album this week on October 28th. This comes shortly after 21 brought out the Canadian artist at Morehouse and Spelman University during his homecoming performance.

With the release of the collaboration album on the horizon, here are four songs the two artists have done together over the years:

“Sneakin” was the first time Drake and 21 Savage collaborated on a track while he was still in his contract with Cash Money Records.

The two hip-hop artists teamed up on a track produced by Metro Boomin, who Savage did a joint project with Savage Mode II, which also features a Screwed and Chopped version.

Last year, Drake recruited 21 Savage to be on his album Certified Lover Boy, which broke records on Spotify. The track is another Metro Boomin-produced song that peaked at number 4 on the Billboard Top 100.

Last by not least, “Issa” was an unreleased track both artists did alongside Young Thug and was left off of Savage’s 2017 Issa album, which Thugger and the “Best I Ever Had” artist supported. The song was also leaked on Soundcloud years later.

Drake is all for surprises.

Earlier this year, he dropped a surprise seventh studio album, Honestly, Nevermind. The 14-track album has one feature from the aforementioned 21 Savage.

The album drew mixed reviews due to several tracks featuring him singing instead of rapping.