With views from the intersection of wackness and anti-blackness, here’s a roundup of the crazy and the WTF happenings in government and the impact on the culture. 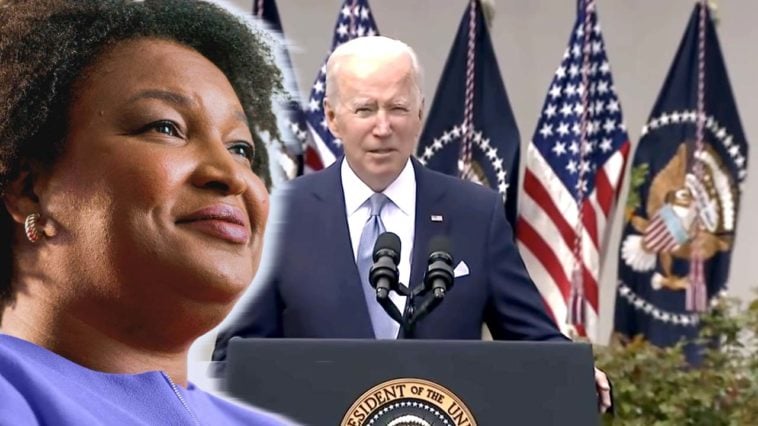 After her first bid to become the governor of Georgia in 2018, Stacey Abrams announced that she planned to sue over the way the state’s elections were managed.  More than three years later, the lawsuit is going to trial.

The lawsuit was filed in November 2018 by Abrams’ Fair Fight Action organization and alleges that state officials “grossly mismanaged” the election.  This mismanagement resulted in the deprivation of voters’ right to vote – in particular low-income voters and people of color.

The lawsuit originally called for a sweeping overhaul of the state’s elections. However, the scope narrowed after the state made changes that had addressed some allegations and others were dismissed by the court.

The trial is set to begin on April 18th.

Even if the U.S. District Judge Steve Jones sides with Abrams’ team, it is uncertain whether that will affect elections this year. Jones and other federal judges are reluctant to order last-minute changes, noting that the Supreme Court has repeatedly said federal judges shouldn’t alter rules “on the eve of an election.”

Months before the 2018 election, Abrams, a Democrat, accused her Republican opponent in the governor’s race, who was then Secretary of State Brian Kemp, of using his position as Georgia’s chief elections officer to promote voter suppression. This was an allegation that Kemp has continuously denied.

Over three years since that fiercely fought contest captured national attention, the focus on Georgia’s elections has only intensified with the 2020 primary bringing sharp criticism. Later that year, former President Donald Trump demeaned state officials who declined to overturn his narrow general election loss in the state.

Abrams will be the only Democrat running for governor.  She’ll face Kemp again in November if he fends off a primary challenge from former U.S. Sen. David Perdue.

Abrams’ Fair Fight stated it works to promote voting rights and support progressive candidates around the country, and its PAC has raised more than $100 million since its founding. It filed the lawsuit along with Care in Action, which is a nonprofit that advocates for domestic workers; several churches have joined the suit as plaintiffs as well.

Fair Fight had collected statements from people who said they had problems voting cited in the lawsuit multiple alleged problems which included: purging of eligible voters from voter rolls under a “use it or lose it” policy, the state’s so-called exact match voter registration rules,  insufficient number of voting machines at some precincts, as well as lack of sufficient training for election officials. It asked a federal judge to find that Georgia’s election processes violated the U.S. Constitution and federal law.

Lawyers for the state of Georgia argued that claims in the lawsuit “are not supported by the evidence.” They said the number, geographic scope and severity of the alleged problems experienced by voters identified by Fair Fight  “do not rise to a level sufficient to demonstrate an unconstitutional burden on voting in Georgia.” They also argued that the alleged problems cited are not the responsibility of the state officials named in the lawsuit.

GOP Representative Marjorie Taylor Greene stated last week that she reported Jimmy Kimmel to Capitol Police after the comedian had joked that Will Smith should slap her as well. Green (R-GA) said that Kimmel’s wisecrack, a reference to Will Smith slapping Chris Rock at the Oscars, was akin to being a “threat of violence.”

“ABC, this threat of violence against me by @jimmykimmel has been filed with the @CapitolPolice,” she tweeted.

In response to Greene’s outrage and subsequent police report, Kimmel fired back on Twitter that night, tweeting out: “Officer? I would like to report a joke.”

Greene then told Kimmel “It’s not a joke,” claiming he purposely provoked his audience to threaten her.

“Your fans called my office today in direct response to you inciting physical violence towards me,” she tweeted. “It’s not a joke. You knew exactly what you were doing.”

Kimmel made the quip about Greene on the 4/5/22 “Jimmy Kimmel Live!” after she tweeted on Twitter that GOP Sens. Lisa Murkowski, Susan Collins and Mitt Romney were “pro-pedophile” for saying they would vote to confirm Judge Ketanji Brown Jackson to the Supreme Court. Her comment referenced claims by other Republicans that Jackson had previously let sex offenders off the hook with lenient sentences.

In his monologue, Jimmy Kimmel referred to the GOP rep as a “Klan mom” and said she was “especially upset” by her fellow Republicans’ decision to confirm Jackson.

“Wow, where is Will Smith when you really need him?” Kimmel then joked.

President Joe Biden has announced plans to welcome 100,000 Ukrainian refugees to the U.S.  Many African and Caribbean immigrants are questioning why so many Black refugees fleeing their conflict-torn countries have been denied similar humanitarian consideration.

Biden also announced that Ukrainians who were already in the U.S. would receive Temporary Protected Status, meaning that they would not be deported. Advocates for Black immigrants argued the President’s generosity is more than the US has offered to Haitians fleeing after a deadly earthquake and their president’s assassination.  They also called out the US response to Cameroonians who had been displaced by their country’s civil war and for many Black immigrants being deported under what they call racist, xenophobic immigration policies.

“The reality is that all over the world, unfortunately, there are many people who are experiencing similar things and don’t get that type of urgency from the U.S. government or attention,” said Samah Sisay, a Liberian immigrant, who has done work as an immigration lawyer years and is now affiliated with the Center for Constitutional Rights.

“It’s just clear racism. There’s this feeling that Ukrainians are Europeans and therefore, the immigration system maybe doesn’t view them as a threat in the same ways we see conversations about Black migrants,” Sisay said. “You see how there is this double standard.”

Russia invaded Ukraine last month by land, air and sea, forcing  thousands to various borders seeking to leave the country. African citizens living in Ukraine reported incidents of racist discrimination and abuse at the country’s borders that included being beaten as well as being denied entry to trains or being left stranded in border towns.

There have been other reports that highlighted the explicit differences in how  African and Middle Eastern refugees from Ukraine have been welcomed into western Europe compared to white Ukrainians. Just last month, an alliance of prominent civil rights lawyers from around the world announced it would be filing an appeal to the United Nations on behalf of Black refugees facing racial discrimination while trying to flee the invasion.

Advocates have also said racial disparities are clear, and made even more clear by well-documented hardships Black immigrants and refugees face in the U.S.. Black immigrants are more also likely to be deported than immigrants of other races.  According to a report from the Black Alliance for Just Immigration, bond payments for Black immigrants to leave detention centers and end family separations have been consistently higher than those for non-Black immigrants.

“We’ve always known that African, Black people always get the worst of the worst,” Bello, the founder of the Cameroon American Council said. “Ukraine has TPS after days of conflict, and there’s no Cameroonian TPS after five years.”

Refugees and immigrants who have obtained Temporary Protected Status can avoid deportation, obtain a work permit and even travel for up to 18 months. TPS designation is typically reserved for countries in an ongoing conflict, experiencing a devastating natural disaster, or “other extraordinary temporary conditions.” Officials announced the TPS designations for Ukraine in early March.