Not many people would pick diminutive Atlanta rapper T.I. over bulked-up NY rapper Busta Rhymes in a real fight. But don’t worry, Busta’s recent challenge toward Tip was just for a musical battle.

With his new album ELE 2 dropping soon, Busta Rhymes was interviewed by Fat Joe and made it clear he wants to face T.I. in a Verzuz competition. “I’m begging you to step in the ring with me,” Busta says to T.I. “I’ma bust your ass.”

The co-creator of Verzuz (along with Swizz Beatz) went on Twitter to solicit requests for smash hit series’ second season. Busta Rhymes’ name was brought up by some fans who want to see him square off with the likes of LL Cool J and Twista. It looks like T.I. has pissed off Drake. Canada’s finest had a nasty old rumor about him resurface recently when the King Of The South seemed to confirm it on his new album, The L.I.B.R.A. After the story reignited over the weekend, fans noticed Drake unfollowed T.I. on Instagram. 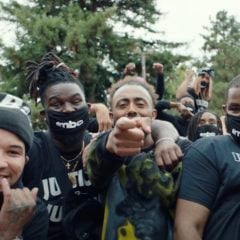