R&B superstar Beyoncé is playing with people’s emotions. The iconic singer has teased fans with a new pic of herself donning a Tiffany Diamond and indirectly sparked some pregnancy chatter. 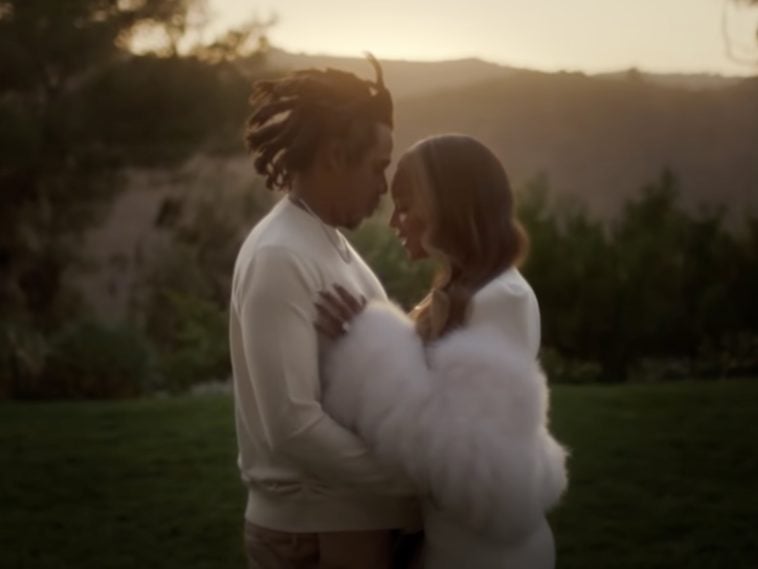 Queen Bey started it all by sharing a snapshot of herself and husband JAY-Z boo’d up together. At first glance, it looks like it could be a pregnancy announcement with both their hands on her stomach but at closer glance the highlight is the Tiffany & Co. diamond around her neck.

Despite plugging the diamond, it didn’t stop social media and the loyal BeyHive for thinking there’s a chance she could be pregnant with her fourth child.

“I thought it was a pregnancy announcement 😂😍”

“Whew chile! I thought it was a pregnancy announcement 😭”

Bey and JAY are repping luxury these days. The iconic duo star in a new Tiffany & Co advertisement as part of their recent “About Love” campaign in which they are the ambassadors.

Beyoncé does a beautiful rendition of the iconic “Moon River” in the new video ad. The pair rocked out as Bey sang to Hov in the “About Love” campaign advertisement. There was also some extra footage that showed the two joking about getting re-engaged, mainly because the rap legend wants an engagement ring, while Bey mentions 2022 will be the twentieth year they’ve spent together.

It’ll have been twenty years of the power couple being in love and doing their part, and they are showing no signs of slowing down. Most recently, JAY-Z and Beyoncé have had Historically Black Colleges and Universities on their minds. The power couple’s new Tiffany & Co. campaign reportedly has direct ties to helping get students the financial aid needed in the arts and creative fields.

“We would like to thank the Shawn Carter Foundation, BeyGOOD, The Carters and the Tiffany & Co. family for including Lincoln University in this amazing gift,” Dr. Brenda A. Allen, president of Lincoln University said in a statement. “Lincoln has placed a high priority on supporting the arts and humanities on our campus. Providing financial support for students pursuing these majors enhances their ability to more fully engage their studies.” (CNN)

In August 2021, Bey went to her IG page to make some major statements. The singer and her husband JAY-Z had social media’s full attention courtesy of new pics modeling for luxury diamond brand Tiffany & Co.