New York rap heavyweight 50 Cent will use anything for ammunition in his ongoing feud with Young Buck, which made the Lil Nas X pic that blew up on Instagram Friday night easy pickings. After Lil Nas X showed the world his spot-on Nicki Minaj Halloween costume, 50 used it to take another jab at Buck.

50 Cent’s go-to insult for Tennessee rapper Young Buck (his former G-Unit comrade) is that Buck is into transgender women. 50 has used the openly gay rapper Lil Nas X before as a punchline for his jokes about Buck, and did it again this time, saying the two “might make a love connection.” 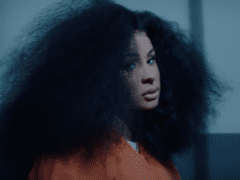 In addition to 50 using Lil Nas to troll Young Buck, he also clowned Lil Nas directly, telling Nicki Minaj to “come get him.” Lil Nas X responded to 50, telling him to mind his own business. NEWSDr. Dre’s Daughter Warns Haters About Who She Turns Into At Night W/ Bloody Pics

Before the Halloween stuff, Curtis Jackson bashed Young Buck over his recent mug shot. Fifty went to his social media pages and didn’t hold back on roasting his former protégé.