Young Thug was denied bond for the third time during the Thursday, August 18 hearing regarding his RICO case. Brian Steel implied the rapper was the victim of a law enforcement vendetta from a 2015 drive-by shooting of Lil Wayne’s tour bus. 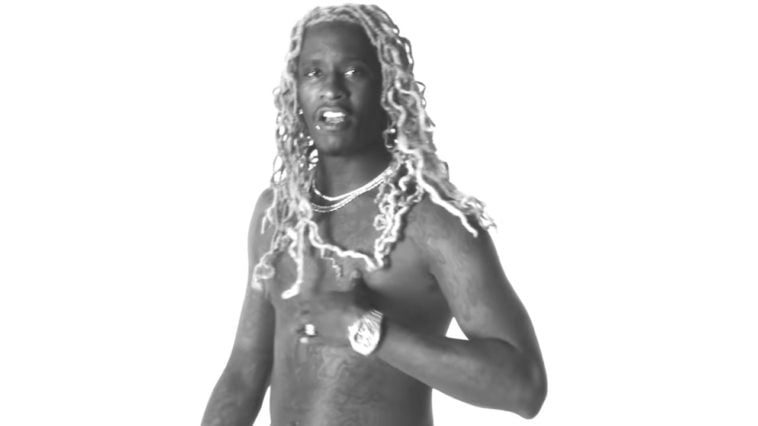 Rolling Stone reported that Young Thug was denied bond for the third time in the Thursday, August 18 hearing regarding his RICO case.

His lawyer, Brian Steel, had suggested the rapper was the victim of a law enforcement vendetta that stemmed from a 2015 drive-by shooting of Lil Wayne’s tour bus.

Steel brought up the tour bus incident after telling Fulton County Judge Ural Glanville that Young Thug was a “role model” who should be “applauded” – not incarcerated for his ability to endure extreme poverty and adversity to achieve the success he had.

While the lawyer presented arguments for the rapper to be released on strict house arrest, Steel claimed that the video, in addition to other discovery evidence turned over by prosecuters did not support the indictment that landed Young Thug in prison in May 2021, and met with additional charges last week.

During the Thursday hearing, Steel spoke to the court, saying that the video related to Williams’ arrest did not support any new charges that were claiming he possessed an automatic weapon that day.

In addition, he has said that the discovery handed over by prosecutors failed to prove Williams was the individual who allegedly stated in a Jan. 2015 group chat that, “sacrifices must be made, soldiers must fall in order for the battle to be won.”

Steel brought up the Lil Wayne bus shooting and implied it was not coincidental.

Don Geary, who was the prosecutor now helming the sprawling RICO case for the Fulton County District Attorney, had worked for neighboring Cobb County back in 2015 when he prosecuted YSL-affiliated rapper Jimmy “PeeWee Roscoe” Winfrey for the act of spraying Lil Wayne’s bus with bullets after an altercation at a nightclub.

Lil Wayne was not identified by name in the hearing Thursday, but it was clear he was referring to the incident when Steel accused Geary of settling a score.

The bus shooting had been put on the 88-page RICO indictment case last May and described as an “overt acts”  carried out in furtherance of the alleged racketeering conspiracy.

“Mr. Williams has been targeted for about seven years by law enforcement,” Steel said. “Mr. Geary is the one who prosecuted Mr. Winfrey in Cobb County. Mr. Williams was not indicted for that case, but he’s indicted now.”

Geary had defended the underlying indictment, saying his office sought to re-indict Williams with the new charges because Williams is a “dangerous” individual, with the recovered machine gun as alleged proof.

“Mr. Williams is not a convicted felon. He can have weapons. But he can’t have an automatic weapon,” Geary said. “This is a dangerous person…YSL is a dangerous gang, and this is the man who leads that gang, and he’s dangerous.”

“The surveillance around the house (shows) a person exit the house – not Mr. Williams – with that gun. That’s not Mr. Williams. So to sit here and say it’s Mr. Williams’ gun is wrong,” the lawyer said, referring to the video of the May 9 arrest and regarding the “sacrifices must be made” comment referenced in the indictment.

Steel had proposed how his client should be held while released on house arrest to Judge Glanville.

One of his proposals was a secret location in the Georgia countryside, where “no one knows where he is.”

Another aspect of the proposal was that Young Thug was guarded by professional law enforcement around the clock.

“He should be in a house without any internet, without any electronic media, without any access to anyone except his lawyers,” Steel said. “Jeffery Williams, your honor, he is the most polite. He’s a genius. And he understands that we’re fighting for his life. He would not risk anything on bond.”

Judge Glanville considered the motion and arguments for 30 minutes, and when he returned, he denied the bond without explanation.

Glanville stated he was “still not convinced” that Williams is a candidate for pre-trial release.

Young Thug had his first bond hearing before a judge at the Fulton County court on June 4.

The question of his bond was discussed at length with testimony from a stellar lineup of witnesses including music executive Kevin Liles, a 15-year-old motivational speaker, and community activists who all vouched for the embattled rapper’s release.

In spite of it all, the judge denied the rapper’s bond, citing concerns about Thugger being a danger to the community, witnesses, and to other people in this indictment.