Nothing says “We’re back!” for an on-again, off-again couple like some happy bae-cation pics. Atlanta rapper YFN Lucci and Reginae Carter weren’t that obvious about it, but some observant fans have put together enough evidence to suggest the pair is on-again.

Lil Wayne‘s daughter Reginae and YFN Lucci broke up last year, after which she swore she would never date another rapper. But people keeping an eye on both of their social media pages noticed something making it look like Reginae changed her mind.

The future of “Love & Hip-Hop” may be playing out right in front of us. Louisiana rapper NBA Youngboy is currently dating Yaya Mayweather (Floyd Mayweather‘s daughter), but boldly declared on a new song that he wants to have a baby with Reginae Carter. 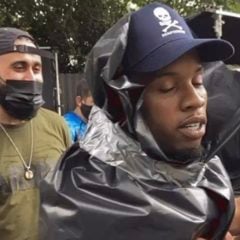 Earlier this year, NBA Youngboy’s on-again, off-again girlfriend Yaya Mayweather was charged with allegedly stabbing one of the rapper’s baby’s mothers. Yaya could be facing 99 years in prison if convicted.

According to the charging documents, obtained by The Blast, the 19-year-old has been charged with Aggravated Assault With A Deadly Weapon. A serious felony in the state of Texas, and if convicted the charge can carry a VERY lenghly prison sentence.  Sentencing guidelines for this charge range from 5 up to 99 YEARS in state prison and a $10,000 fine. (The Blast) T.I. + Tiny Still In The Clear Of Sexual Assault Investigation