The 2022 BET Awards was by far the biggest night for the culture. SOHH let’s recap the greatest award show that celebrates black music. 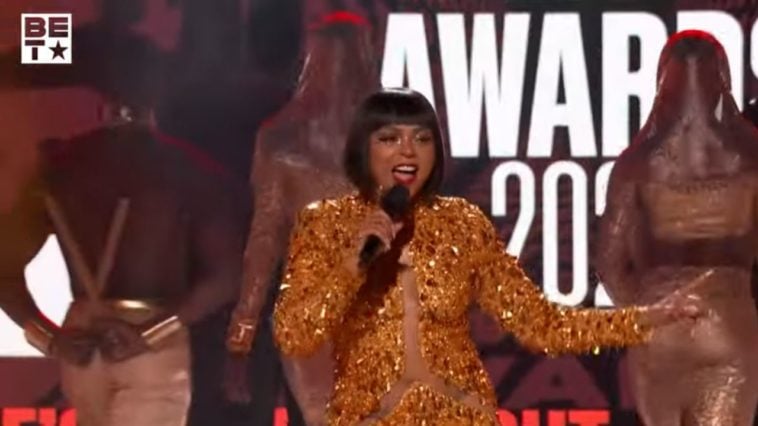 Before the biggest award show in black culture kicked off, the pre-show got us all hyped for the night. TV personality Terrence J and social media influencer Pretty Vee hosted the red carpet, and of course, SOHH had the chance to review the hottest celebrity looks, fashion, hair, and the moments in music.

Lizzo opened the show with her hit single “About Damn Time.”

The pop star didn’t allow cancel culture to stop her from giving an epic performance, dressed in a gold two-piece with reflective disco ball-like material. The “Rumors” artist took it back with a 70s-themed performance.

The show continued with Brandy and Jack Harlow hitting the stage together.

The Grammy award-winning singer performed her recent freestyle to Jack’s “First Class”. It looks like the feud between the two has come to an end.

Newly signed TDE artist Doechii took to the award stage after, performing her hit track “Persuasive.” Showing off her dance moves, the Florida artist was feeling her performance as she snatched off her 30’ inch wig, revealing her fresh cornrows as she closed out with “Crazy.”

The awards kept the performances hot as artists like Muni Long sang her viral hit, “Hours and Hours.” Chance The Rapper came through with an important message.

Joey Badass, helping out his music peers, performed their inspirational track “Highs and Lows.” Ella Mai brought out legendary singer-songwriter BabyFace to play the piano during her performance of “DFMU.”  She didn’t stop there; Roddy Ricch also joined Ella on stage to perform their hit track “How.”

Latto brought boss energy to the BET Awards with one of the night’s best performances. Stepping on stage with a long fur coat and a Cuban cigar before dropping the opening bars to “It’s Giving”; she’s the one calling the shots. The southern belle performed “Big Energy” to close the explosive performance. She also surprised fans by bringing out Mariah Carey. Latto gave MC the flowers she deserved, ending with confetti falling from the ceiling.

Giveon closed out the BET Awards with new music. Though he had some technical difficulties, the “Heartbreak Anniversary” kept the show going.

Janelle Monae was the first presenter of the night.

Before giving out the award for Best Female R&B/, Janelle, like artists who took time to speak out about Roe Vs. Wade, overturned.

“Celebrating us. Happy Black music month, happy pride month. I want to give a special shoutout to Black women, to black queer artist, to black non-binary artist, these artist are creating art on our own terms, owning our truths and  expressing ourselves freely and unapologetically in a world that tried to control and police our bodies, my bodies and our deections, my decides.”

Janelle added, “F*ck you Supreme court, we must celebrate our art by protecting our rights and our truths.”

Winning the award for Best Female R&B/Pop Artist. Jazmine Sullivan didn’t give the typical acceptance speech. The “Pick Up Your Feelings” artist also took time to use her voice to “speak directly to the men standing up with us and standing up for us” regarding the overturned Roe v. Wade.

As the show went on, Black excellence was made tonight as Wizkid and Tems represented the motherland as they took home the Best Collaboration award for their hit track “Essence” featuring Justin Beiber. Wiz was not in attendance to accept the award, but Tems accepted and said, “This award is for Nigeria.” where the two artists are from.

“No matter how you work, this is an unexpected gift and blessing,” Mary J Blige said as she took home the HER Award for her feel-good song, “Good Morning Gorgeous.”

Best International Act,  a new category in the award show, was won by Nigerian artist Tems taking home two awards for the night.

Young actress Marsai Martin took home the YoungStar Award and, though not in attendance, Zendaya took home the Best Actress award. R&B duo Silk Sonic closed out the BET award show by winning the Album of the Year award.

Before music mogul Diddy was honored with the Lifetime Achievement Award, artists like Jodeci, Mary J Blidge, Shyne, Jada Kiss, Lil Kim, Busta Rhymes, and Bryson Tiller took the stage to pay homage to the music legend. With an iconic performance of songs like “Bad Boyz,” “Come and Talk to Me,” “All About the Benjamins,” and “Pass the Courvoisier,” to name a few.

Diddy spat a few bars and gave a heartfelt tribute to his late wife Kim Porter as he gave an emotional performance to the legendary track “I’ll Be Missing You.” He also brought Faith Evans and the gospel group Maverick City Music to close the performance.

Even though Diddy was given the Lifetime Achievement Award, he’s just getting started with new achievements after partnering with Motown for a newfound R&B label, Love Records.