The ladies in the music industry continue to show us why they’re running things. From new drops to comebacks! 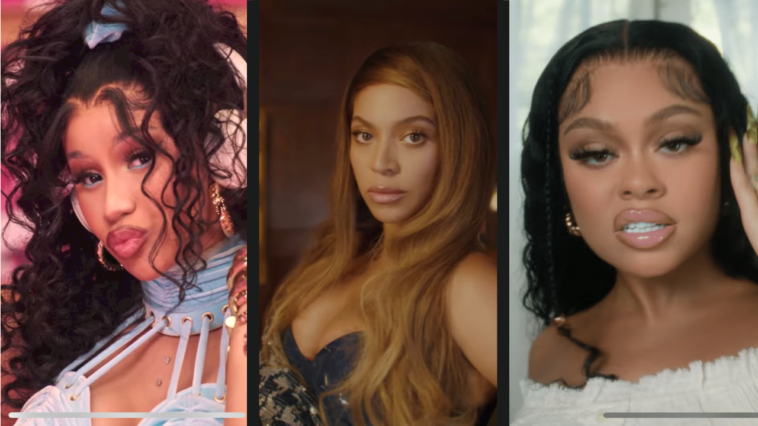 Cardi B has been buzzing in the news lately, from her new shoe collection to clearing up rumors,  Bardi’s comeback is just getting started.

Recently dropping the visuals to her new single “Hot Shit,” featuring Lil Durk and Kanye West, fans are hyped by the music video and ready for the album!

After taking to social media to clapback at the Supreme court Roe V Wade ruling with a snippet to her new track, Latto finally released the full version of the empowering song, “Pu**y.”

Just as we thought, fans are here for the message!

Beyonce is taking over social media. The Queen has joined Tik Tok, and the BeyHive is in a frenzy.

With over 5 million views, the first video is an appreciation post to all the fans that have shown love to her new, upbeat track “Break My Soul.”

On August 6, Megan Thee Stallion will perform at “Good Morning America.” With tickets already sold out, the Houston hottie may use her performance to speak out on the Roe V Wade overturn.

Lizzo has been making major power moves this year. As if being nominated for her first Emmy Award wasn’t enough, the pop star is celebrating the release of her new album Special  by performing on the “Today Show.”

Alicia Keys is living her best life during her world tour, but that’s not stopping the R&B diva from releasing new music.  Ms. Keys Recently dropped her new single, “Come For Me,” featuring Lucky Daye and Khalid.

Muni Long is such a vibe, recently collaborating with Saweetie on their upbeat track “Baby Boo.”  The singer-songwriter has her fans feeling the love this summer.

Since GloRilla signed with CMG, she has been taking the music industry by storm with no signs of letting up.

One thing about Flo Milli is that she will continue to show love to her fans throughout her music.

A few weeks after dropping “Conceited,” she’s back with her new single “No Face,” gearing up for the new album.

Danileigh finally moved on from DaBaby. She now tells her side of why she ended their toxic relationship in a candid breakup song, “Dead to Me,” the singer has made a comeback, and fans are excited.