Robin Thicke has been accused of groping model Emily Ratajkowski on the set of his music video for “Blurred Lines.” Ratajkowski discussed the incident in her new book “My Body.” 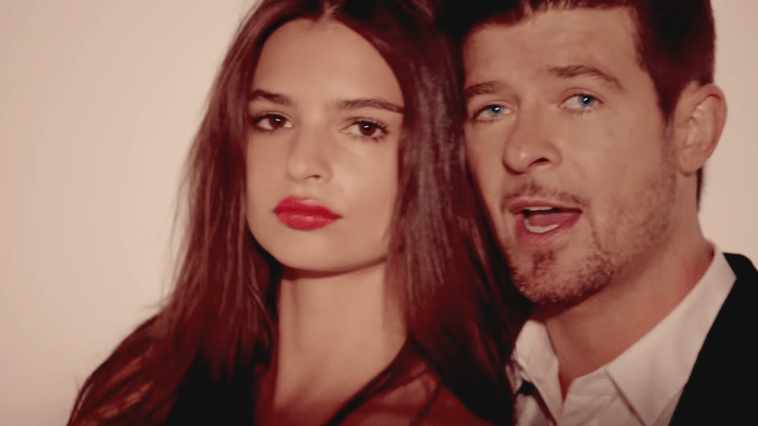 In an excerpt published from her book, Emily Ratajkowski accuses Thicke of inappropriately touching her breasts from behind and reveals that he appeared drunk on the set of “Blurred Lines”, Thicke’s Grammy-nominated 2013 hit. The director of the music video, Diane Martel, has confirmed Ratajkowski’s story.

“Suddenly, out of nowhere, I felt the coolness and foreignness of a stranger’s hands cupping my bare breasts from behind…I instinctively moved away, looking back at Robin Thicke.”

Excerpt from My Body

According to Newsweek, Martel said, “Up until this incident we were laughing, the guys were very respectful. The girls were open and feeling free.”

Ratajkowski wrote in her book, “[The director, Diane Martel’s] voice cracked as she yelled out to me, ‘Are you okay?’”

Who Is Emily Ratajkowski?

Emily Ratajkowski is an entrepreneur, writer, actress, model, and activist. Ratajkowski was commissioned by New York Magazine for a self-written essay entitled “Buying Myself Back,” which led to widespread public discourse on image ownership. Immediately following, she landed her first book deal, an essay collection called “My Body,” which has been published by Metropolitan Books.

Hollywood actress Paula Patton remembered the life of ex-husband Robin’s late father Alan. Paula went to her Instagram page to reflect on the impact Alan had on her saying, “I Loved & Respected Him So Much!”