Hollywood rap star Nick Cannon might be seriously leveling up his daddy duties. The “Wild ‘N Out” host is reportedly expecting a set of twins with a woman named Abby De La Rosa. De La Rosa went online with a gender reveal and let it be known she’d be having two boys. La Rosa ended up posting Cannon’s “Ncredible” logo to her Instagram. There is no exact confirmation they’re his children, but all signs are pointing to it.

“Thank you so much @yaneth.events & @estellamathews for putting together such a beautiful and intimate #genderreveal” 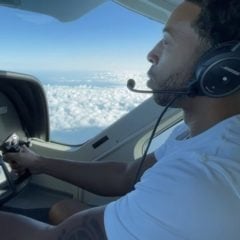 NEWSLudacris Flies Super High In The Sky – Literally – As A Pilot

Nick Cannon Coming Back To Wild ‘N Out

After apologizing for controversial anti-Semitic comments he made last year, Nick Cannon is returning as the host of the TV series “Wild ‘N Out.” His apology paved the way for a reunion with ViacomCBS, the parent company of the show’s network, VH1.

“I want to assure my Jewish friends, new and old, that this is only the beginning of my education — I am committed to deeper connections, more profound learning and strengthening the bond between our two cultures today and every day going forward.” (Nick Cannon)

Last summer, Cannon interviewed former Public Enemy member Professor Griff on his podcast, where they talked negatively about Jewish people. Cannon was fired by ViacomCBS, then he accused the company of “robbing” and underpaying Black entertainers.

“Nick has not only apologized and taken responsibility for his comments, but he has also worked to educate himself and others through engagement with Jewish leaders and on his platforms. Those efforts are of the utmost importance and that’s why we have invited him to rejoin our team.” (MTV Entertainment Group)

The COVID-19 pandemic is hitting everybody hard. Nick Cannon was just one of a long string of high-profile entertainers to recently test positive for coronavirus.

Nick Cannon has tested positive for COVID-19 and will sit out hosting The Masked Singer season 5 for at least few episodes, EW can confirm. Variety first reported the news. Niecy Nash, who was a guest panelist on The Masked Singer’s fourth installment, will fill in as production on the new season begins Thursday, a rep for the Fox singing competition tells EW. Cannon is currently resting and in isolation, his rep confirms, and the network expects him to return to the series later in the season. (EW)