It’s Friday again, and this week’s highlight is the highly-anticipated joint album Her Loss by Drake and 21 Savage. However, fans can also check out new bangerz from NBA Meechy Baby, Vado, and more. If you’re not fully caught up, check out our past editions to build your playlists this winter season. 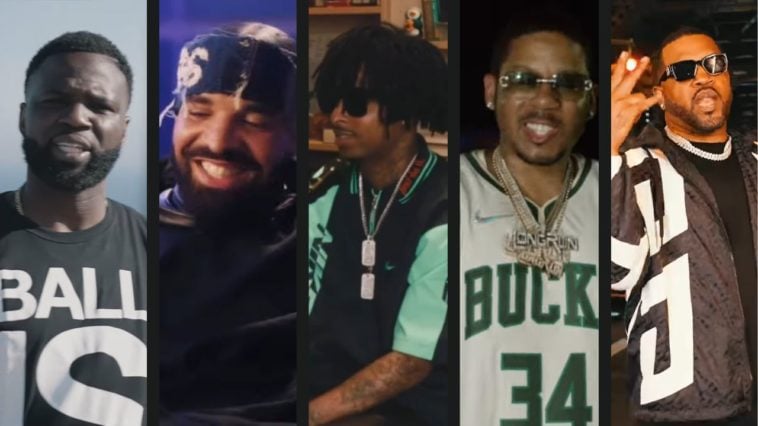 Drake And 21 Savage – Her Loss

Her Loss is finally here. After a release date change, a staged Vogue cover appearance, and an NPR Desk performance that quickly fooled fans, the Drake and 21 Savage collaboration album is here.

The 16-track album marks Champagne Papi’s second album of the year after his surprise release of Honestly, Nevermind.

Dropping after the duo’s well-orchestrated buzz, including a cover art featuring a sultry model, it is time to give your weekend over to OVO and 21.

Dribble2Much – Crazy In The Park

Dribble2Much has dropped the visuals to his new song, “Crazy In The Park.” With his smooth crossover from basketball to music, the artist was recently on SOHH to discuss his skills, music, and teaching Drake to play ball.

Hit play and enjoy the drop.

Dedicated to Ice Spice in an attempt to woo her, this new song by NLE Choppa has raised a lot of discussions. However, the “Munch” rapper wasn’t here for it, immediately shutting it down.

The Never Broke Again artists are doing all they can to live up to their name, dropping music every other day and week. Last week, the collective dropped an album, Nightmare on 38th St, a week after NBA YoungBoy dropped.

Now, it is Meechy Baby’s turn with the intense and melancholic “Son” ahead of the release of his album, Who Is Meechy 2.

The visual is animation-style, depicting his journey set to him dropping bars on suicidal ideation, loss, and more.

Let us know what you think of it.

With an extensive portfolio that includes collaborations with “The Alchemist” (Super Tecmo Bo), “Real Bad Man” (Killing Nothing) and “Nicolas Craven” (Fair Exchange No Robbery), Boldy James is not a flash in the pan.

Jam to this album, and hit us with your comments.

Lecrae drops a 13-song mixtape to close out his Church Clothes mixtape series. The mixtape is a blend of Christianity and hip-hop, which are two genres he has shown a love for throughout his career.

Dusty Locane went for gritty with a touch of Halloween in the aptly titled album. The drill rapper’s second solo project of the year has 15 tracks and collaborations with his usual suspects, 3kizzy and OMB Jay Dee.

Have a great weekend, SOHH fam!.