The Lil Baby “Untrapped” documentary premiered to a packed house at the Tribeca Film Festival. It was followed by an intimate Q&A with the artist and a standout performance later in the evening. The anticipated documentary reveals different aspects of life in “The Trap” and will profoundly change the way people perceive the impact of poverty and racism in America. 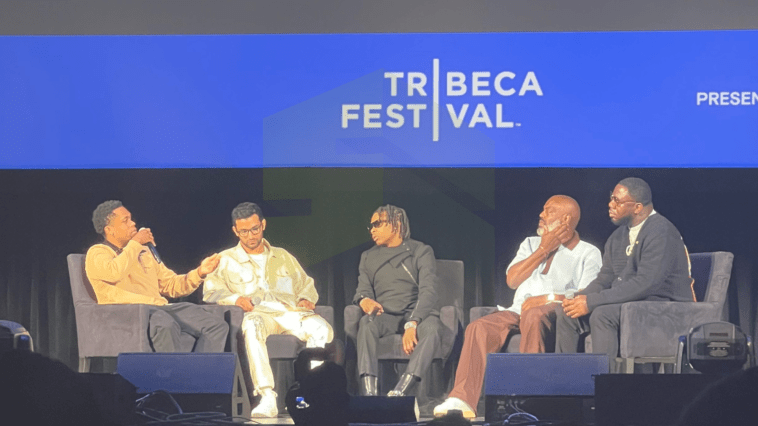 “Untrapped: The Story of Lil Baby” chronicles the rapper’s rise from a high-profile, charismatic drug dealer in the trenches of Southwest Atlanta to becoming one of the most influential artists in rap culture today. The film is directed by Karam Gill, and produced by Quality Control, 4PF, and MGX Creative.

The film begins with a look at Lil Baby’s home life with his two sons. The devoted father, born Dominique Armani Jones, talked about how he didn’t grow up with his dad who he said was  “always out of town.”  Recognizing the importance of his role in their lives, he stressed how he wants his kids to have what he didn’t – guidance in becoming a man: “I don’t wanna be no holiday dad,” he remarked.

The film included appearances from Drake, Gunna, and Young Thug, who discuss Lil Baby’s drive to make it out of the trenches. The audience in the Tribeca Festival theater cheered when Thugger, currently detained on RICO charges, appeared on the screen:

“With or without rap,” Thug remarked, “he was going to get some money. Like he was fucking up millions of dollars before he made one song.”

His arrest halted the rapper’s street success at the age of 19.  From there, he realized that he had to get out of “The Trap.”

“In prison, you spend a lot of time alone, you have time to think about what’s going on around you,” Jones recalled in one of the film’s most profound moments. “America has a system in place…and this system’s been around for a long long time and it’s designed for us to fail.”

After spending two years in prison; Baby decided to pivot his direction and find another way to make money.

Pierre “P” Thomas, CEO and co-founder of the record label Quality Control, convinced the “Drip Too Hard Artist” to start rapping in the first place. Despite having success in the streets, P recalls how Baby was reluctant to be a rapper. P described the problematic decision Lil Baby faced:

“How you gonna tell a nigga to stop making ‘right now’ money for a rap career where it aint guaranteed you gonna make it.”

Lil Baby reflects on the first time he gave rap a go.

“When I first tried rapping, I didn’t know what I was doing, I was self-conscious and then I started playing around in the studio with my buddy Marlo.”

Marlo, a hustler who left the streets to pursue rap, never saw rap success.  Unable to leave street life alone, he lost his life in a violent shooting.  Lil Baby described losing his friend as a known hazard to the game.

While Lil Baby had a great story to tell through the music, he worked for years to develop the skills he needed as an artist and continued to evolve.

The Trap Is A Mindset

The film takes to great lengths to highlight the greater impact of racism and poverty on Lil Baby and African Americans living in the South West End of Atlanta.

Professor Maurice J. Hobson, Associate Professor of African American Studies and History at Georgia State University, was consulted to present the historical context behind life for black people born in a dead-end reality where the majority die without having ever experienced life outside of “the trap.

Hobson describes a community impoverished by neglect and deliberate disenfranchisement, pointing to the 1996 Olympics in Atlanta as a pivotal time when city officials sought to build a grand city to accommodate the games.  In doing so, lower-income residents in Lil Baby’s community were shuffled around and displaced to keep them out of sight.

Lil Baby fell into the trap early on, being raised in a single-parent household with few options to make it out or feed his family. He dropped out of high school and pursued hustling full-time.  He describes this as the true definition of “the trap” – an endless cycle of imprisonment and poverty.

“It’s a cycle, you go to jail, you get out, you keep hustling because you don’t know nothing else. When they call that shit a trap, that shits really a trap. Your mind is trapped, your brain trapped, your body trapped.”

The nearly two-hour documentary displays various layers of the very private artist, who admits to still being uncomfortable speaking and performing in front of crowds. The audience got to see Lil Baby as an activist at a moment hip-hop desperately needed a voice after the death of George Floyd.

“We’ve been going through the same shit decade after decade, I’m just the new generation to experience it,” Lil Baby remarked as he described what led to the creation of the raptivist anthem, “The Bigger Picture.”

“With my music, I want to show people what’s going on in my world.”

“Untrapped: The Story Of Lil Baby” stands as an “against-all-odds” success story of redemption, determination, and the hard choices we have to make in order to rise up. The film is also a stark reminder to the world of the harsh realities of “the trap” as not just a state of being or a place but a state of mind that imprisons those among us who are marginalized, discarded, and invisible from which few, like Lil Baby, escape.