Thanks to a pardon from outgoing President Donald Trump, Florida rapper Kodak Black can put the weapons charges that landed him in federal prison behind him. But the chart-topping artist is still not free and clear from his troubles with the law.

Kodak Black is out of jail after Donald Trump signed off on a presidential pardon, but the pardon doesn’t mean across-the-board immunity. The state of South Carolina still intends to prosecute the platinum-selling artist on charges that he sexually assaulted a woman in 2016.

Kodak Black has been pardoned by Donald Trump in one case, but he’s facing separate charges in another case. 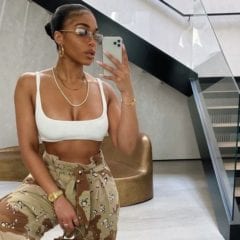 Kodak Black Could Land Back In Prison

The sexual assault case against Kodak, a.k.a. Bill Israel, carries a sentence of up to 30 years in prison if he’s convicted. In addition to the most recent weapons case, the 23-year-old has already been locked up several times for crimes related to drugs, weapons, robbery and assault. WATCHSZA Gives A Pre-Pool Goals Swimsuit Look In The Mirror

Grammy-winning rapper Lil Wayne and Kodak Black are back-back. The hip-hop pair have reportedly received huge pardons in their criminal cases – one which already has KB behind bars – courtesy of Trump.

Unsurprisingly enough, he also reportedly prepared a handful of preemptive pardons (for those who haven’t been charged with a crime) for White House officials as well as close friends and family. Also on the list reportedly might include himself, his lawyer and his oldest daughter’s husband.

Preemptive pardons are under discussion for top White House officials who have not been charged with crimes, including Chief of Staff Mark Meadows, senior adviser Stephen Miller, personnel chief John McEntee, and social media director Dan Scavino. The president’s eldest daughter, Ivanka Trump, her husband, Jared Kushner, who both hold White House positions, are also under consideration, the people said. Trump’s personal lawyer Rudy Giuliani has also discussed the issue of a pardon with the president. (Bloomberg)