Florida rapper Kodak Black makes more moves while locked up than a lot of artists make with all the free time in the world. Despite being transferred recently from a federal prison in Kentucky to a facility in Illinois — he’s serving time for weapons possession — Kodak has announced that he has a new album coming soon, a documentary coming soon, and the Internet was recently treated to a snippet of a new song featuring Kodak and Tory Lanez.

At just 23 years old, Kodak Black has left a big impression on the rap game.

He’s put out two studio albums — 2017’s Painting Pictures and 2018’s Dying to Live — and several mixtapes. His debut album went platinum, while his second went gold and peaked at No. 1 on the Billboard 200 chart. His songs “Zeze” and “Tunnel Vision” reached top-10 status on the Billboard Hot 100 singles chart.

Kodak has done a lot in a relatively little amount of time — so much that some fans might not be able to keep up. Here are 10 things you might not know about him…

1. He Is The Son Of A Haitian Immigrant

Kodak Black was born Dieuson Octave on June 11, 1997. His mother immigrated to the U.S. from Haiti and settling in Florida, where Kodak was raised. He got into some legal trouble as a kid, including an arrest for auto theft in middle school, but Kodak says rap provided an alternative to a full-time life of crime. Although he dropped out of school, he later earned his G.E.D. while in prison.

2. His Rap Name Was Inspired By Social Media

Early on, Dieuson rapped under the names “Black,” “Lil’ Black” and “J-Black.” When he began using Instagram, he adopted the rap name “Kodak Black” because of the social media platform’s emphasis on photos. 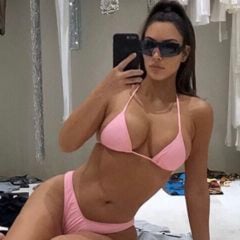 3. He Has A Rocky Relationship With Social Media

Like a lot of celebrities, Kodak Black could use a full-time social media consultant to help him think every time before he posts. He’s been the center of controversy due to incidents on Instagram and Twitter, like when he posted an X-rated home video; when he said he “don’t really like Black girls” because they’re “too gutter”; and when he infamously hit on the late Nipsey Hussle‘s girlfriend Lauren London just days after Nipsey was killed. Kodak has deleted and restarted his social media pages since entering the public eye. WATCH2 Chainz Shows Off His Love For Gardening + Veggies Goals

4. Kodak Black Was In Two Groups Before Going Solo

In his pre-teen and early-teen years, Kodak was part of two rap groups. One was called Brutal Youngnz, and the other was called The Kolyons. When he was 16, he released a solo mixtape, Project Baby.

5. Drake Played A Role In Kodak Getting His Big Break

In 2015, Drake posted a video of himself dancing to Kodak’s “Skrt” from his Heart of the Projects mixtape. The clip generated a lot of attention for Kodak Black, and soon after he signed a major-label deal with Atlantic Records.

6. He Changed His Legal Name For Religious Reasons

In 2018, Kodak legally changed his name to Bill K. Kapri, motivated by his interest in the Hebrew Israelite religion. He originally was going to change his name to Bill Kahan Blanco. Kodak was turned onto the religion while serving time in prison.

7. Kodak Black Is Committed To Charity

Kodak Black’s net worth has been reported at approximately $600,000 and the young artist has been generous in using his money for good. He has donated thousands of dollars to causes like childcare, early childhood education, and college scholarships. He’s also said he wants to build a school in Haiti.

8. His Arrest Record Is Long

9. He’s Not Afraid To Fight For Himself In Court

Kodak Black isn’t afraid to challenge a powerful opponent. Earlier this year he filed a lawsuit against the Federal Bureau of Prisons alleging that he was being tortured by guards and denied access to a rabbi. A couple of weeks after the lawsuit was filed, Kodak was transferred to a different prison, where his attorney has said he’s being treated much better. In the past, Kodak has sued the record label that first signed him when he was 16, and he sued Walmart for selling knockoffs of his signature “Sniper Gang” chain.

Six songs featuring Kodak Black have earned over 100 million Spotify streams. The most popular is “Zeze” (with Offset and Travis Scott) which has been streamed over 500,000 times. The track reached No. 1 in streams in the U.S. and No. 3 globally.

Cam’ron Has An Iced-Out Dipset Chain For Kevin Durant