Last night, HDBeenDope celebrated his signing to Jay-Z’s record label, Roc Nation, with a champagne toast surrounded by his “legacy.” 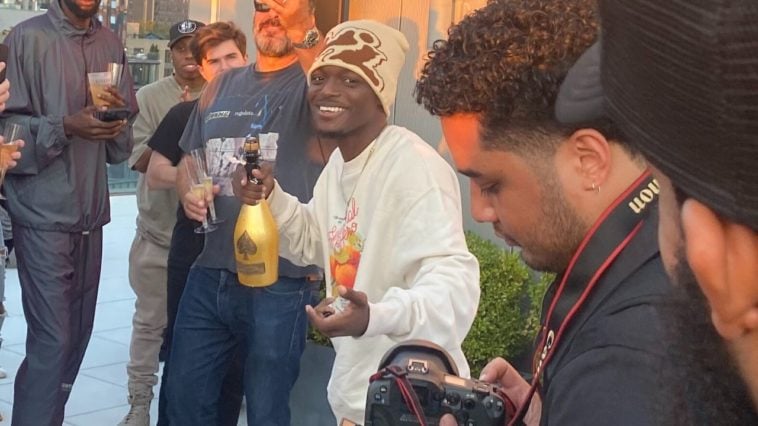 Rap artist HDBeenDope has a lot to celebrate after recently securing the bag earlier this week, becoming the newest artist to represent Roc Nation.

The champagne toast was held on the rooftop of Roc Nation’s Hudson Yards NYC office with a breathtaking view of the entire city.

The intimate setting featured HD’s day ones, and his Roc Nation team, keeping the celebration in the family.

Before the official toast, the “Wake Em Up” artist gave his speech:

“For me to be in this position, I understand the brevity of the situation. This shit means more than just a rapper in hip hop, this is a moment, this is about legacy.”

The up-and-coming rapper also gave insight into some of the music coming our way:

“With all this new music that we bout to drop, you gon understand the energy. It’s telling you where we going, where we going is a mentality, it’s not this physical place.”

The label also gifted HD a customized letterman jacket to initiate the signing.

Today, HDBeenDope, unveiled his new single and visual for “Wake Em Up,” produced by Dizzy Banko via Roc Nation Label.

Within the track, HD calls on listeners sleeping on the rap artist to prepare for what he has planned next for the world of hip hop.

In July, Roc Nation partnered with the United Justice Coalition to bring the first annual Social Justice Summit to NYC.

Working with over 40 non-profit and advocacy organizations, the summit brought together some of the country’s most affluent entertainers, professors, activists, and experts.

Here are three takeaways from the event. DaniLeigh Gets Big Love Or Big Shade From Dreezy?