Fresh off the release of his recent album, From A Birds Eye View, and a series of sold-out shows all over the United States, plus upcoming European tour dates, Cordae continues to stake his claim as a powerful voice of this generation – this time with a standing room only performance at Webster Hall in New York. 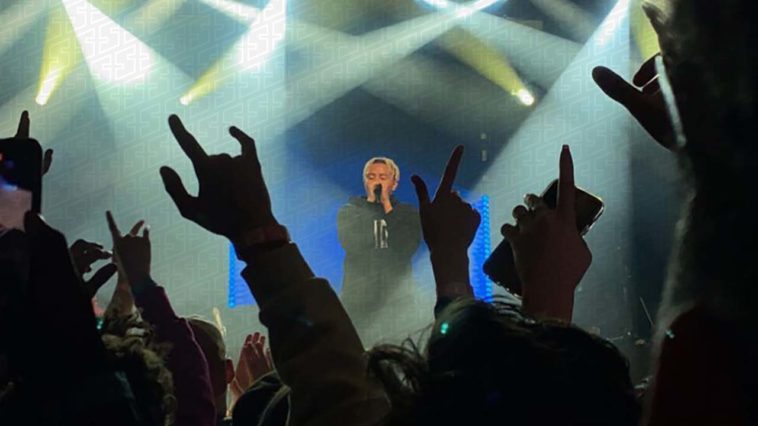 149 Views
Comments Off on Cordae Delivers On The Hype At FABEV Tour Stop, Webster Hall, NY

Lauded by Eminem and Dr. Dre as “the future of rap”, Cordae summoned fans from across three states that quickly packed into the floor of Webster Hall, desperate to get a good spot to see the artist.  The overflow of demand was so great that a second show was added.

The show opened with performances from BLK ODYSSEY and New York’s own Justine Skye, who put on for her city. Skye played her hits with Justin Timberlake and Schoolboy Q that got the crowd just the right amount of hype while still keeping the energy to a tee. Both opening acts set the vibe beautifully with energetic sets that set the stage for what to expect from Cordae.

After a quick DJ set featuring rap classics like UGK’s “International Players Anthem” and Kanye West’s “All Falls Down,” the lights dimmed and the Hi-Level logo appeared on the screen, signaling Cordae’s emergence. The Maryland-born rapper began the show with “Shiloh’s Interlude,” a freestyle by his childhood friend who’s currently incarcerated, then went straight into one of his more hype songs from his album – the lead single, “Sinister,” featuring Lil Wayne. Cordae followed with another single, “Super,” and then two tracks from his previous album, The Lost Boy, titled “Have Mercy” and “Kung Fu.”

Following the more explosive tracks, which definitely got the crowd going, Cordae slowed it down for a few songs, starting with a cover of “Angel” by Shaggy which transitioned into his song “C Carter.” He kept that slower pace pretty consistent through the next few songs and, despite the calls for more hype music, the crowd stayed entranced by his stage presence and performance aura.

Cordae then picked the pace back up with his song “Bad Idea” featuring Chance the Rapper and then followed with his most popular song to date, “RNP” featuring Anderson.Paak. Proving his singing chops once more, he closed the show with a Destiny’s Child cover for “Say My Name,” which transitioned to his song “Chronicles” featuring H.E.R, who was in attendance at the show but didn’t perform.  (Cordae recently posted a teaser on Instagram with H.E.R. and Lil Durk on the set of the music video for Chronicles.).

…And there was an encore

Throughout the show, Cordae was open about the love he has for his “family” of fans and supporters of his music. He shared about his mental struggles prior to the tour that almost led him to cancel, saying that he has been uplifted by “the energy and faces in the crowd.” Cordae then thanked his fans, said goodnight, and walked off the stage.  Following calls of “encore,” Cordae returned for one final performance of his hype classic, “Broke as F*ck.”

Cordae encapsulated all the elements of a quality show with the perfect mix of hype and chill, performance art and intimacy. I can’t wait to see him perform again and take witness to his upward trajectory in music.