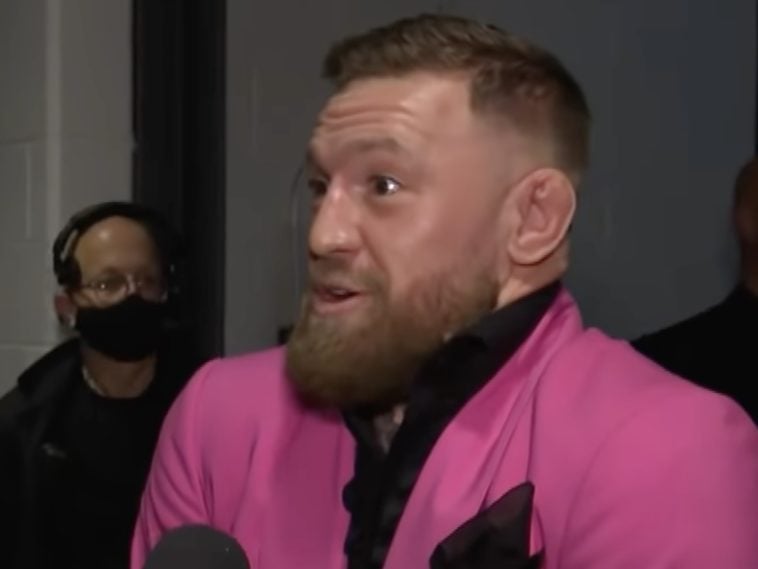 Despite viral footage and pics showing the pair being aggressive with one another on a red carpet, McGregor has downplayed the entire situation. To make things worse, he even referenced not knowing MGK outside of him dating Hollywood actress Megan Fox.

“Absolutely nothing. I don’t know. He showed up, and I don’t know. I don’t know the guy,” he said when asked what happened between himself and MGK. “Nothing happened with me, I only fight real fighters, people that actually fight, you know what I mean. I certainly don’t fight little vanilla boy rappers. I don’t even know the guy. I don’t know anything about him, except that he’s with Megan Fox.” (ET Online)

People around the scene believe some dicey words ultimately sparked the spat.

According to an eyewitness, McGregor and MGK “exchanged some words” on the red carpet, before the MMA fighter lunged at the musician. MGK and Fox subsequently left the carpet and threatened not to pose for photos, the eyewitness says, but then they returned once McGregor left. (ET Online)

A spy told Page Six they “got into a fight at the top of the carpet” and “had to be pulled apart.” Photos show the UFC champ, 33, and “Bloody Valentine” singer, 31, being pulled apart by what looks like security after the scuffle broke out. (Page Six)

Both McGregor and MGK hit up their Instagram pages with snapshots from the event. They both brought their better halves to the star-studded awards show.

“Proud Irish in Brooklyn, New York for the MTV Video Music Awards. Thank you @mtv so much for the love. Congrats J.B the goat. @mtv ☘️”

Kelly might have had the edge both fashion-wise and date wise courtesy of the pics he shared featuring himself and Fox.

Earlier in the year, McGregor flexed his love for the rap game. Conor compared his fashion goals to the late, great Tupac Shakur.

The hip-hop enthusiast and prized fighter went to his social media pages to show the similarities between himself and the late rap icon. McGregor hit up his Instagram page initially with footage of himself donning the same type of Rolex Pac rocked in the 90’s. Then, Conor shared a throwback look of Tupac donning a watch very much like what McGregor is now sporting.

New watch, @rolex. A retro styled day date of the modern era. Brand new! You won’t see this green often, nor the diamonds wrapped around the barrel in this manner. A timeless, classic, vintage styled ,modern Rolex watch. Like something you would have seen on Tupac in the 90s. Incredible! #OnlyGodCanJudge