Rihanna is officially a mother. It’s reported that Rihanna and her fiance A$AP Rocky just welcomed their first child and the gender is no longer a mystery. 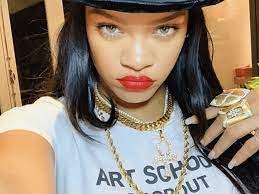 Rihanna Is a Mother

According to sources the newly “engaged” couple Rihanna and A$AP Rocky welcomed their first child, last Friday May 13th but it is just now being revealed to the public.

Though we saw Rihanna shopping for girl clothes back in March, sources are saying that the new bundle of joy is indeed a boy.

One of the first celebrities to congratulate and confirm the birth was Rihanna’s ex and R&B superstar Chris Brown.

Breezy took to his Instagram story 10 minutes after the news was made public to congratulate the two.

CB posted on a blank orange background “CONGRATULATIONS” with a prayer emoji and a heart. Though Chris didn’t tag Rihanna or A$AP in the story, it was evident Breezy was sending love to his former flame.

Rihanna was not letting up on making boss moves during her pregnancy. In fact while fans were patiently waiting for the arrival of her new bundle of joy, Riri was out there working until she couldn’t anymore.

The bad gal billionaire took to Instagram on May 10th to announce the launching of FentyAfrica just 3 days before she went into labor.

Fenty Africa is set to release May 27, proving she’s planning on building an empire for her baby around the world!