Atlanta rapper 2 Chainz is going super throwback mode ahead of Thursday. The hip-hop superstar has come through with his must-see new So Help Me God album cover art featuring him from way back in the day.

Chainz hit up his Instagram page with the jaw-dropping shot. The cover art features Deuce from his middle school days and well before his rap star fame.

“I know a lot of artists have used baby pictures and kid photos to tell their story or reveal there journey , but this one different ! this is the 8th grade me , this was proof pic because like many of us we couldn’t afford to order the picture package and yes I had on 2 chains, I was an aspiring drug dealer and an occasional thief ( when pop went to prison he told me to steal stuff I need & not want 🤔)if I could tell that person something today I would tell them don’t give up , times is hard , but they don’t last forever SO HELP ME GOD this FRIDAY .. art by me ✋🏾” -2 Chainz’s Instagram 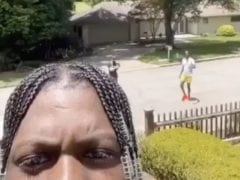 Barring any setbacks, Deuce is set to invade streaming platforms this week. The Def Jam album is penciled in to drop Friday.

2 Chainz, the multi-platinum, Grammy Award®-winning MC has officially set next Friday, November 13th as the release date of his new sixth studio album via Def Jam Recordings, SO HELP ME GOD. SO HELP ME GOD is the long-awaited follow-up to Rap Or Go To The League (released March 2019), described as 2 Chainz’ most personal, most lyrical, most soulful record to date. A&R’d by LeBron James, Rap Or Go To The League spun off two smashes: the MTV VMA-nominated “Rule The World” featuring Ariana Grande, which boasts over 22 million YouTube views to date; and the RIAA platinum “Bigger Than You” featuring Drake and Quavo with over 62 million combined YouTube views to date.

Leading up to the single’s premiere, Chainz made sure to give it proper social media attention.

2 Chainz’s Road Back To Album-Making

Deuce’s new single comes just weeks after he delivered “Money Maker” to the world. The Lil Wayne-assisted single is expected to appear on an upcoming new solo project.

The Atlanta rapper released his last full length solo project Rap Or Go To The League back in 2019, which saw features from Marsha Ambrosius, Young Thug, Kendrick Lamar, Ariana Grande, Ty Dolla $ign, Lil Wayne, Chance The Rapper, and more. This year, he dropped off his collab project with T.R.U. titled No Face No Case in February. His most recent cut was the Lil Wayne-assisted cut “Money Maker.” The brand new track tonight signals the arrival of his So Help Me God project is near. (REVOLT) Rihanna Returns To IG To Show Off Her ‘Butta’ Smooth Body