According to Billboard, Lil Durk’s new album The Voice ranks No. 2 in this week’s top five, its highest position since its Christmas Eve release. Durk trails only pop star Taylor Swift, who’s been No. 1 for three weeks. Rather than gloat about his success, Durkio said he’s laying low until he drops the deluxe edition of The Voice. That’s when he promises to show why he’s one of the hottest acts in hip-hop. 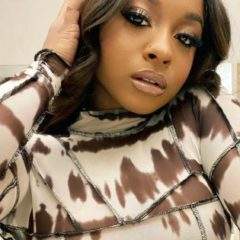 NEWSReginae Carter Tells Women To Become The Product: “Don’t Be A Sample H*e”

The platinum-selling MC went to his Twitter page to acknowledge his new state of mind. LD said he would stop publicly name-dropping late people outside of his music.

“I’m done name dropping the dead after my deluxe ….in songs only tho 😘 … I feel like dropping something tonight 😗”

A few days ago, Durk took to Twitter to celebrate major success. His newly released The Voice album moved upwards of 93,000 units in its first week. He let the sales for the first full week be known and praised himself with a goat a.k.a. greatest of all time emoji.