Tory Lanez recently went on DJ Akademiks’ podcast and discussed his trial for the shooting incident involving Megan Thee Stallion. He revealed that he is facing a possible 24-year sentence. 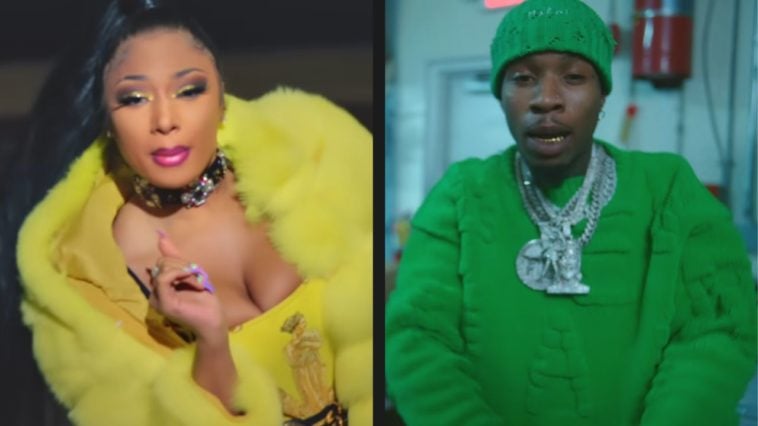 How Tory Got Here

The R&B singer candidly revealed to DJ Akademiks that he is facing a 24-year to life sentence after being accused of shooting the Houston-born rapper in the foot in 2020.

He said, “I am in an open case and maybe I make this shit look really beautiful but I’m facing 24 years.”

Megan sat down with CBS Morning co-host Gayle King for a candid interview earlier this year. She gave explicit details, recalling the incident and her relationship with Tory.

While the “Say It” singer should lawfully face the consequences for the assault against Meg, fans strongly feel the larger issue is his lengthy sentence.

In the state of California, Lanez is facing a single count of assault with a semiautomatic weapon, carrying a loaded weapon, and use of the firearm.

According to California Penal Code Section 245:

“Any person who commits an assault upon the person of another with a deadly weapon or instrument other than a firearm shall be punished by imprisonment in the state prison for two, three, or four years, or in a county jail for not exceeding one year, or by a fine not exceeding ten thousand dollars ($10,000), or by both the fine and imprisonment.”

“Any person who commits an assault upon the person of another with a semiautomatic firearm shall be punished by imprisonment in the state prison for three, six, or nine years.”

While legal records have not been made public yet, Tory is facing three separate charges that could accumulate to his possible 24-year sentence. That sentence also aligns with one murder charge in the state of California.

According to Sections 187-199, first-degree murder is punishable by up to 25 years to life, while second-degree receives 15 years to life.

It also states that the second-degree’s “term could increase to 20 years to life if the defendant killed the victim while shooting a firearm from a motor vehicle.”

US Prison System And Black Men

While many advocates and celebrities have helped to shift the narrative to bring light to prison reform, the incarceration rate for black men remains a problem.

According to an article published in 2021 by the Sentencing Project:

“Black Americans are incarcerated in state prisons across the country at nearly five times the rate of whites, and Latinx people are 1.3 times as likely to be incarcerated than non-Latinx whites.”

Furthermore, the long sentencing could explain all the trouble the rappers have been in.

Earlier this year, Jay Z, Yo Gotti, and Roc Nation revealed that they are working on a four-part documentary about the inhumane prison horrors of  Parchman Correctional Facility in Mississippi.