Tekashi69 is thirsty for attention and playing in dangerous territory. The ‘GINE’ rapper has been amping up his beef with Lil Durk for weeks to rebuild his career and has officially stooped to an all-time low. 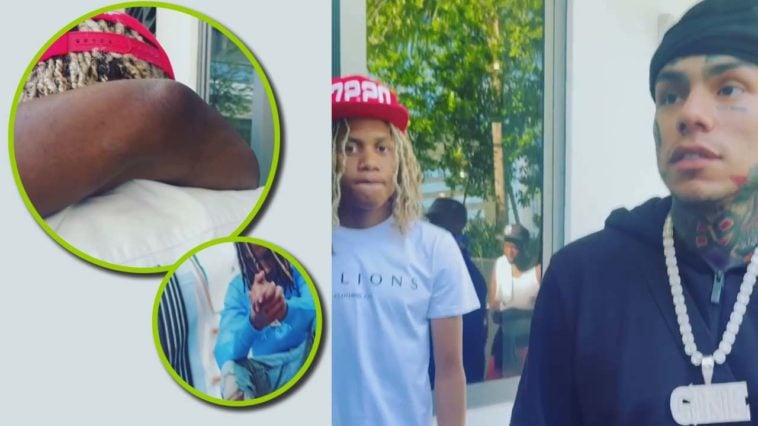 6ix9ine is constantly playing dangerous games, and just when the world thought he gained some human decency he showed he could get even dirtier, displaying ultimate disrespect.

6ix9ine’s latest clout-chasing tactic has been to actively troll Lil Durk unprovoked in hopes to get his attention. Lil Durk has been remaining quiet and calm throughout the “beef” forcing the “FEFE” rapper to go to desperate measures.

Tekashi’s newest stunt has him setting up a meeting with Lil Durk look-alike, Perkio who recently starred in the “Block List” rapper’s new video.

The “TROLLZ” rapper proceeded to make a video gifting Perkio a jacket with a picture of the late King Von on it – in order to disrespect Durk.

In the video, Perkio is clearly uncomfortable with the exchange.  He got on Instagram live immediately following the incident and explained that he had no idea what was going to happen explaining:

“This was never supposed to happen like never …. I was only supposed to collab with Stevewilldoit”

According to Perkio, he was led to believe he was meeting with a Youtuber by the name of SteveWillDoIt.  However, when the Durk doppelganger got there he was welcomed upstairs and the YouTuber began to talk about 6ix9ine. Perkio says he started to walk outside and was approached by Tekashi & his crew.

The look-a-like then went on to call out 69 as a clout-chaser and spoke on his frustration with the rapper recording him against his will “everything you do is for clout, I told you I wasn’t doing that.”

The lawyers for Tekashi69’s two alleged robbery victims claim the rapper’s new song was aimed at antagonizing them. 6ix9ine and his lawyers refuted this accusation, saying “GINE” was fabricated to “rehabilitate” his career by creating beef with Lil Durk. Yung Bleu Celebrates The Delivery Of His Baby Girl