New York rapper Pardison Fontaine is really, really, really thankful to have Megan Thee Stallion in his life. The hip-hop star has lit up social media with a major nod to the man in the sky for connecting him with everyone’s favorite Hottie. Pardison Fontaine Thanks God For Meg

Fontaine hit up his Instagram page with a super salute to Stallion. Coincidentally, the post doesn’t feature him but just Stallion showing off her beauty through a mirror selfie.

A few days ago, Fontaine hit up his IG page to celebrate both Meg and her pal Cardi B‘s historic music biz achievements. 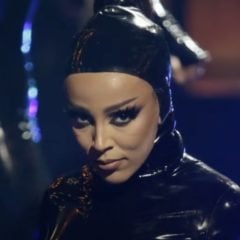 During the Grammy Awards broadcast, both Cardi and Meg made temperatures go all the way “Up” with their flashy sets. Cardi started things off with her latest single before sharing the stage with her “WAP” collaborator.

Earlier in the week, Cardi issued a Twitter statement dishing on how she felt about the Grammys organization.

Along with sharing on-stage time with Cardi, Megan also blew people away with her “Savage” live set.

Don’t be shy, get up and do that TikTok dance you learned last year. Megan Thee Stallion performed her viral hit “Savage (Remix)” at the Grammys on Sunday, looking like an angel in a white feathered burlesque look. “Tonight is my first time at the Grammys, but it is not my first time entertaining you,” she said before breaking into full choreography. If this is how it starts, you’re gonna want to stick around for the end. She starts rapping after an outfit change, blessing us with the lyrics that got us through a hot ‘rona summer. (Vulture)

Bow Wow Clashes With Houston Mayor Over Concert: “I’m Not The Bad Guy”