Memphis rapper NLE Choppa doesn’t care about material things. The rap rookie went online to shut down any beef or negativity coming at him for allegedly wearing fake designer clothes.

After A$AP Mob member A$AP Bari took to his Instagram Story to call out Choppa over wearing fake Vlone, Choppa responded with a careless message. Choppa let it be known putting on the real stuff doesn’t matter to him and that regardless of what clothes he’s wearing, he still signed a $6 million deal.

You buy the real sh*t, I throw the fu sh*t on and still up 8 figures. Tell em my deal was 6 Million ion care what the f*ck I wear sincerely” 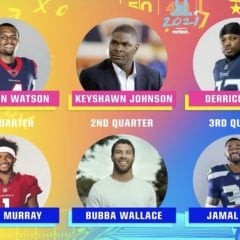 SQUADPro Bowl: The Madden NFL 21 Edition Presented By Verizon Lived Up To The Hype

New York rapper 50 Cent is all here for NLE Choppa. The hip-hop veteran has come forward to show the rap rookie some major attention and a big co-sign. Fifty hit up his Instagram page with a snapshot from Choppa’s recently released “Picture Me Grapin” music video. 50 gave his co-sign and questioned how anyone couldn’t get down with NLE.

Hours prior, Choppa went to his Instagram page with the same pic and acknowledged his new music video had reached millions of views in just days. Shooting His Shot At Skai Jackson

A few days ago, Choppa took to Twitter to hop in the long list of interested people shooting their shot at newly single actress Skai Jackson. He kept his response to her tweet short and sweet, but also recently name-dropped her on Instagram Live, asking why followers were talking about his “little boo”.

The rising rap star might have nearly broke the Internet with his new hairstyle. The hip-hop star lit up social media with some new looks at himself rocking zip-zero hair on his head.

50 Cent Explains Why He Had Past Issues W/ Michael K. Williams