The National Basketball Association is changing its tune when the 2020-2021 season starts up. While the NBA remains one of the most progressive pro sports leagues on social justice issues, it is removing “Black Lives Matter” messages from the court next season.

In the middle of an NBA Finals series drawing historically low TV ratings, commissioner Adam Silver said the league won’t display the message of equality on the court next season. Silver still plans to push the NBA’s Black Lives Matter initiatives off the court.

“My sense is there’ll be somewhat a return to normalcy, that those messages will largely be left to be delivered off the floor, and I understand those people who are saying ‘I’m on your side, but I want to watch a basketball game.’” (ClutchPoints)

The NBA has openly supported the Black Lives Matter movement and other causes since the league resumed play during the COVID-19 pandemic. Players put messages on the back of their jerseys like “Equality,” “Say Their Names” and “Vote,” among others.

“Black Lives Matter” has been a popular pick for players to put on jerseys and the league has had those words emblazoned on the court during games.

NBA star Dwight Powell recently explained the significance and importance of “Black Lives Matter” being embraced by both fellow players and the public.

Bad Boy Records CEO Diddy was among the hip-hop stars who supported the NBA for deciding to boycott playoff games in August in response to the horrific police shooting of Black man Jacob Blake in Wisconsin. Puff Daddy went to Twitter to react to the Milwaukee Bucks boycotting a pivotal postseason game against the Orlando Magic. Diddy also highlighted the importance of unity. 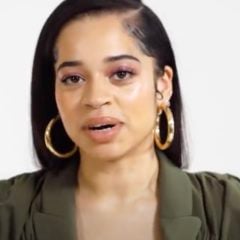 WATCHElla Mai Reveals Everything She Eats In A 24-Hour Day

When the NBA resumed play after its COVID-forced hiatus, Queens rapper Nas went to his Instagram page with a snapshot from a game between the Los Angeles Lakers and LA Clippers. The pic featured NBA icon LeBron James kneeling in support of ending police brutality and pushing the BLM movement forward.

“Stand for something or fall for anything. Salute @kingjames” -Nas’ Instagram 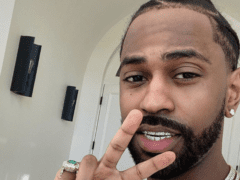 Following a July matchup with the LA Clippers, LeBron spoke with the media about athletes kneeling in unison to support an end to systematic racism. LeBron also credited Black Lives Matter activist Colin Kaepernick for inspiring the teams’ decision to kneel.

“I hope we continue to make Kap proud. Every single day I hope I make him proud on how I live my life, not only on the basketball floor, but off the floor. … I want to always speak out against things that I feel like are unjust. I always want to be educated on things and go about it that way. … Kap was someone who stood up when times weren’t comfortable, when people didn’t understand, people refused to listen to what he was saying. If you go back and go look at any of his postgame interviews when he was talking about why he was kneeling, it had absolutely nothing to do with the flag. It had absolutely nothing to do with the soldiers, the men and women that keep our land free.”

LeBron put emphasis on the importance of pushing for social justice during his press conference.