It’s been 25 years since rap icon 2Pac was killed, but the late rap legend remains a powerful presence in hip-hop culture. Fans still clamoring for any undiscovered music, stories or pictures to add to his legacy may rejoice with a throwback pic surfacing online.

Woman In 2Pac Pic Talks About His ‘Fire And Passion’

An old photo of 2Pac with a woman named Adriana Sandoval resurfaced on social media recently, with the woman providing some backstory. Adriana also shared a pic of herself hugged up alongside Pac’s former Death Row Records labelmate Snoop Dogg.

Adriana actually posted the original pic of herself and Pac together onto her Instagram page back in March 2015.

Truly blessed and honored to have met such an amazing spirit….the story behind the pic…He said he would take a picture with me only if we took two and exchanged numbers…he kept the other pic with my #…. I’ll never forget getting to know him, the fire and passion in his eyes with every word he spoke and what a gentlemen he was, with every single interaction.. @2pac #picswithtupac @eddyacer. #veterans_and_rucas WATCHCardi B Defends Exposing Her Cousin’s Kidnapper In Emotional Video

Grammy-winning rapper Lil Wayne was extra hyped for his Green Bay Packers during the NFL playoffs. The rap superstar released his unexpected “Green & Yellow” rally song which references Pac in the lyrics.

Weezy released “Green & Yellow” on his socials just in time for the Packers to get hyped for their playoff game against the Los Angeles Rams. 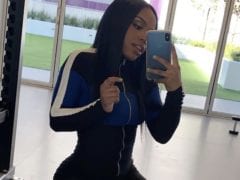 NEWSYaya Mayweather + NBA Youngboy’s Son Might Be Packing Up: “Thinking About Moving To Papa’s House”

Former world heavyweight champion Mike Tyson recently admitted he still feels guilty about his role in Tupac Shakur being in Las Vegas on the night he was fatally shot.