During Young Thug’s bond hearing, 15-year-old Corey Jackson sat in front of Atlanta Judge Ural Glanville to testify as to the positive influence the rapper has had on his life.  His strong and compelling testimony was almost enough to convince the judge of the rapper’s release. 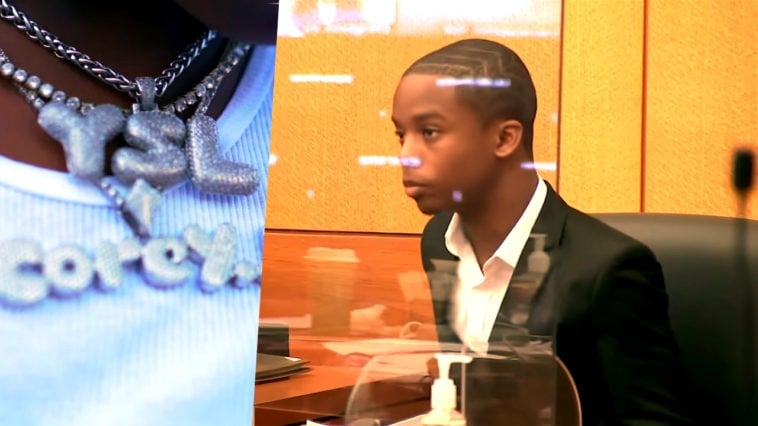 139 Views
Comments Off on Meet The 15-Year-Old Whose Testimony Almost Freed Young Thug: “He Always Deterred Me From Anything Negative.”

15-year-old Corey Jackson walked boldly into the Fulton County courtroom of Judge Ural Glanville and took a seat next to the prominent jurist in the bond hearing of Jeffery Williams, aka Young Thug.  The teen activist, recording artist, and motivational speaker was acute in his responses to the questioning, saying the rapper has been his “mentor.”

Jackson, who met the Atlanta rapper when he was just 8 years old while selling CD’s at a mall in Mississippi, was sure to emphasize the role that the artist played in his young life.

“He showed me how he was able to achieve what he has and where he comes from. And what I have to do if I want to motivate more young people like me”.

The young man, who presented himself with confidence in a neat haircut, dark blue suit and tie, attributed his success as a motivational speaker to the rapper who went as far as taking him on tour across the country and giving Jackson the platform to speak on stage.

Jackson says his motivational career is now stretched so far that he currently speaks at schools and organizations like the Boys and Girls Club to send positive messages to youth.

“First I speak on my five keys to success, which are: hard work, determination, dedication, motivation, and ambition. I show them how you can utilize these 5 keys to success…and that is what he sponsors me with”, referring to the convicted rapper.

The young witness also addressed some of the conversations he’d previously had with Thugger about the desire to change his image, losing the association to the word “Thug”.

“He’s been very vocal about not liking the image that is associated with the name “Young Thug” because whenever you picture that, you assume he’s a “Thug.” Jackson also states, “he would like to reevaluate his image into his name Jeffrey.”

The dynamic teen even went as far as addressing the name, “YSL” and what it represents to him as an aspiring young artist.

“To me YSL is a family…since I met him it’s been all love, all respect…my YSL means Young, Successful, Life because that’s something he has created.”
While Jackson may have offered a particularly compelling testimony that could have swayed the judge to free Williams, it simply wasn’t enough. By the end of the almost 12 hour hearing, the court denied bond to the “Ski” artist, citing concerns that Thugger would be a danger to the community, witnesses, and to other people in the indictment. Ashanti Reacts To How Many People Watched Her Verzuz Battle: “A New Record Was Set!”