The rumors are swirling all around hip-hop veteran Kanye West. Most recently, a TikTok star alleged that the two were supposed to meet up at a hotel last year in Los Angeles.

TikTok Star Claims They Met Up

TikTok star Cole Carrigan went online to say he and West had something set up by former ‘Ye body guard Steve Stanulis. Stanulis has come back with a cease and desist letter in response, saying that never happened. It’s also been reported that Kanye doesn’t even know who Carrigan is.

“Carrigan posted a series of TikTok clips on Thursday about allegedly being summoned to meet West via a “former bodyguard” at a W Hotel in November. In one clip, Carrigan posted screenshots of his alleged direct message exchange with the bodyguard, and said, “I obviously can’t say much… I don’t want a lawsuit from Kim Kardashian West, but these are literally the DMs from the security guard — well, ex-security guard — that reached out to me before we started texting, so that’s all I’m going to say on that.” – (Page Six)

Cosmetics entrepreneur Jeffree Star isn’t letting social media bring him down. Instead, the popular online personality has caved in and had some fun with rumors romantically connecting him to the rap star. Instead of shutting down the wild rumors, Star went to his social media pages with the most hilarious fuel. Without name-dropping Yeezy, Jeffree referenced Kanye’s popular Sunday Service gospel service in an epic tweet.

Star, who has nearly 17 million subscribers on YouTube and is CEO of the makeup company Jeffree Star Cosmetics, also similarly avoided seriously answering questions about the rumor earlier in the day, when he texted the YouTube drama personality Keemstar and wrote “Hahaha” and “I’m having the best time in Wyoming, come visit sometime!” (Insider) 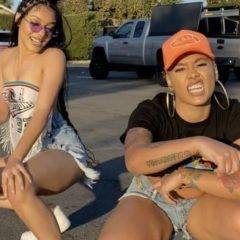 With fans and media still wrapping their heads around the reports of Kanye West and Kim Kardashian getting a divorce, the Internet sleuths have tried to gather evidence that Yeezy has been hooking up with cosmetics entrepreneur and social media influencer Jeffree Star. Who Is Young Devyn?