A week ago, New York rapper Fivio Foreign was arrested at his home for assault. He went on Twitter to address the allegations that he abused his pregnant girlfriend.

While admitting that he and his lady had an argument, Fivio blames the police involvement on neighbors who were being too nosy. He wrote that he would never harm any pregnant woman.

“I appreciate y’all support and concerns and prayers… But I ain’t Neva hide nuffin I do or deny who I was. I wud neva hurt or harm any pregnant woman especially not my GF. My mother wud kill me, plus I’m raise’n 2 blacc lil gurls. & Woman do everything for me in my life. … In relationships people argue and have disagreements, Whoeva kno is kno we been argue’n we argue & we Weill always argue. It’s juss unfortunate dat I have nosy a** neighbors who can’t mind dey own business. Wasn’t da 1st Tyme and won’t b da last.” -Fivio Foreign’s Twitter

Fivio’s Girlfriend Supports His Side

Earlier in the week, the alleged victim came forward to support Fivio on her Instagram Story. Jasmine Giselle also blames things getting escalated on the neighbors.

“Thank you all so much for your kind words but I would like to clarify a few things. I did not call the police on Fivio, I did not press charges and I did not want the father of my children in jail. A situation happened in our home and a nosy neighbor called the police. The police are who pressed charges and in time Fivi will be relieved of all charges. Thank you for respecting our privacy at this time.” (Jasmine Giselle’s IG) 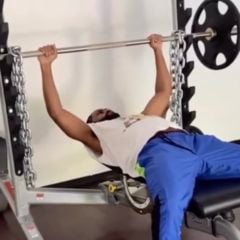 Funk Flex Is Working On Project With Fivio Foreign

New York radio personality Funk Flex is working on something big. The Hot 97 deejay recently announced he has a new project on deck and it’s going to involve Brooklyn’s own Fivio Foreign.

“SOUND OFF! Not time to let this song loose yet! @funkflex x @fivioforeign_8fs !!!!! Video cranking! @juganot I’m putting a project together I think your gonna enjoy! WHO ELSE WOULD U LIKE TO SEE ON THIS NEW PROJECT?” -Funk Flex’s Instagram Fivio was reportedly shot in Atlanta earlier this year. Initial headlines suggested the worst, but the Brooklyn MC himself eased worries.

“Thanx all my demons for bein concerned bout me.. I’m fine.. I don’t stay safe I stay Dangerous 😈 & I move around w God ❗️Trust me I’m good 🤞🏽” -Fivio Foreign’s Twitter