It hasn’t even been an entire day yet and Drake has already thrown many shots on his new joint album Her Loss with 21 Savage. 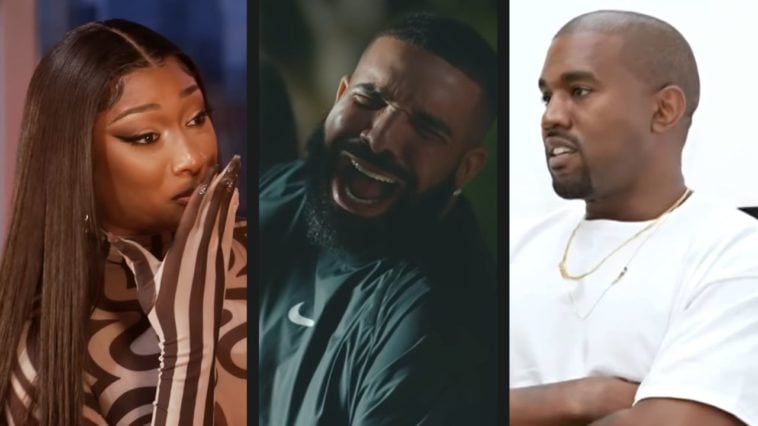 Drake and 21 Savage recently dropped their dual album Her Loss and the “Pound Cake” artist is throwing shots at multiple people in the industry, here’s everyone we know he dissed so far:

In the song,  “Circo Loco” he randomly aims at Megan Thee Stallion. Drake refers to her as a liar in light of her ongoing case with Tory Lanez. Some fans are finding Drizzy’s siding with Lanez on the matter odd, as the two aren’t even close friends.

This marks the second time in the last couple of weeks Meg is inadvertently dragged in the mud by a rapper. While the Houston Hottie did not mention Drake’s name, she responded immediately to the direct reference in a host of tweets.

Meg wants rappers to stop using her name for “Clout” and says that men in the industry are quick to attack Black women:

Champagne Papi also comes for German rap artist D.R.A.M in his song, “BackOutsideBoyz.” In the direct shot, he says, “Tried to bring the drama to me, he ain’t know how we cha-cha slide.” The Honestly Never Mind artist also references DRAM’s popular 2015 single “Cha Cha.”

D.R.A.M responded to the single early this morning on his Twitter account, asking fans to tell the Toronto rapper to “shut up.”

In 2015, Drake and D.R.A.M were publicly beefing, where Erykah Badu and Wale sided with the German artist. The “God’s Plan” artist’s team viciously attacked DRAM after he was accused of stealing his song.

Drizzy also pokes the bear even more with reference to Kanye West on “Circo Loco,” where he acknowledges Ye as an “Opp.” In the verse, he says:

“Linking with the opps, bitch, I did that shit for J. Prince.”

J. Prince initially helped Drake get signed to Young Money in 09’, and has acted as a longtime mentor to the rapper. The Mob Ties CEO was the one who encouraged Drake to end his Kanye beef last year.

Yeezy, who clearly states that he wants no beef, says that he squashed it a while ago and responds to the song in a tweet:

His list of enemies only continues as he takes a direct shot at Serena Williams and her husband, who he calls a “groupie” in “Middle of the Ocean.” If fans can recall, Drake and Serena were an unexclusive item before she married.

The “Sticky” rapper comes for the Supreme Court in light of Roe V. Wade. In “Spin Bout U,” he says:

“Damn, just turned on the news and seen that men who never got pussy in school. Are makin’ laws about what women can do.”

Huffington Post journalist Philip Lewis quickly shared his response in a tweet, where he admits he didn’t expect the “One Dance” to address the overturn :

The Her Loss artist has been making some unusual moves with the portion of a non -existent Howard Stern interview, a staged Tiny Desk concert and a believable Vogue cover, prior to releasing the new album. The internet is buzzing about what message the rapper might be signaling given his latest career approach.

SOHH, Who’s The Girl On The Cover?

Everyone’s buzzing about the girl on the cover of Drake and 21 Savage’s new album, Her Loss and SOHH’s got it covered. Meet Suki, a mystery model and adult film star.