Grammy-winning rapper Eminem has had everybody come at his neck, but it just never seems to work. The newest trend in cancel culture is on TikTok and aimed at the Detroit native, per users referring to themselves as “Gen Z”. 179 Views
Comments Off on Eminem Faces Being ‘Canceled’ Yet Again

After several posts on the short video platform attempting to cancel Slim Shady over his lyrics, social media has ignited. Twitter users have chimed in on the matter, with many “millennials” speaking up and noting how they too tried to have Eminem shut down, to no avail. 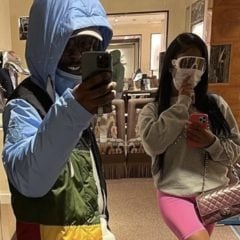 Eminem is taking his followers way back. In February 2021, Slim Shady went online with a dope throwback pic of himself alongside none other than rap friend and mentor Dr. Dre to celebrate his special day.

Em doesn’t really want or need smoke with UFC president Dana White. Instead, Slim Shady used some viral buzz about him dissing the MMA executive and turned it into the perfect rollout for dropping his recent “Higher” music video. Em had the entire world thinking he really had a feud brewing against White after footage emerged of him trashing Dana in an ESPN interview. However, Slim’s video premiere showed the entire segment was featured in his visual.

Earlier that week, Eminem went viral for a video showing him appearing to be doing an ESPN segment with Dana White. In the same clip, the Grammy-winning artist went off on the MMA mogul seemingly out of nowhere. In true combat sports fashion, a lot of fans suspected it might be manufactured hype for a UFC pay-per-view.