Detroit rap legend Eminem appears to have squashed his beef with L.A. hip-hop icon Snoop Dogg, but now he might have started a rivalry that needs to be settled in an MMA octagon. This week, Slim Shady took a jab at UFC president Dana White, one of the biggest names in the sports world.

Eminem was doing an ESPN segment with Dana White when the Grammy-winning artist went off on the MMA mogul seemingly out of nowhere. In true combat sports fashion, a lot of fans suspect it might be manufactured hype for the UFC pay-per-view this weekend. A few days ago, Snoop Dogg went on Bravo’s “Watch What Happens Live” and was asked about Eminem dissing him on his song “Zeus.” Despite speculation and rumors, Snoop Dizzle said it was simply “family business” and not a big deal. 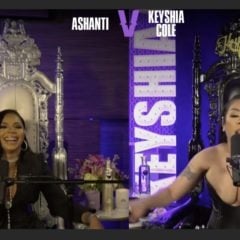 Long Beach rapper Daz Dillinger recently provided some insight as to why longtime collaborator Snoop Dogg and Eminem have been feuding. Daz says Eminem refused to spit a guest verse and ever since then, it’s been bad blood between the two. Tyga Is All Boo’d Up W/ A Mystery Woman