Coi Leray kicked a male fan offstage after he touched her during her weekend performance in Las Vegas. The video was met with mixed reactions online. 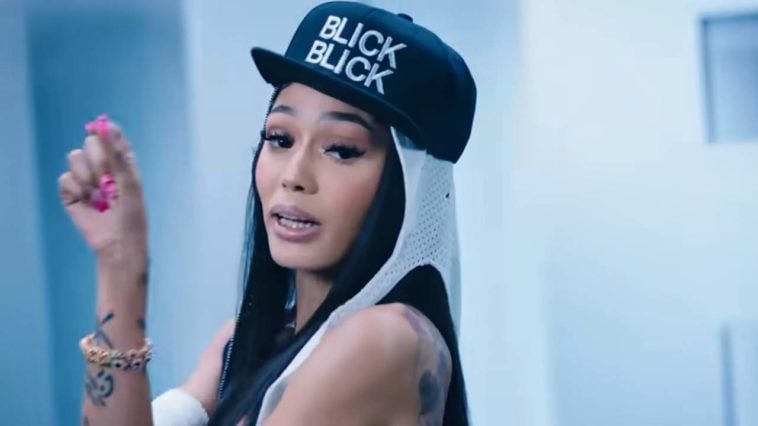 Coi Leray invited a fan on stage to receive a lap dance at her Las Vegas concert. She ended up kicking the male fan off stage after he touched her inappropriately without her permission.

Coi was dancing to Fivio Foreign’s song “What’s My Name” on which she is featured. When she turned around and bent over, the fan touched her backside without her consent, which prompted the “Blick Blick” artist to send him back to his seat.

In a video released online, Coi is heard telling the fan, “N***a get TF outta here. Let’s Start Over ”

The “Trendsetter” then proceeded to invite a different fan to receive the dance.
The video was met with mixed reactions.  Many believe the fan didn’t do anything unusual given the nature of the dance.

Other fans siding with Coi claim that even at strip clubs, it’s never cool to touch a dancer when they’re giving a lap dance unless they say it’s okay.

On social media, the reactions are varied. One user on Twitter identified as @tljr2 felt there was a double standard in Leray’s reaction to the fan he tweeted, “a girl will kick a nigga off stage for touching her ass… then grind her pussy on the VERY NEXT nigga face that come on stage

but the nigga that touched her ass the bad guy… what we doin out here man ?”

Before kicking a fan offstage for touching her lady parts, Coi Leray has had her share of drama – most recently a rap beef with Tami Roman’s daughter, Jazz Anderson.

Coi Leray got served on her own track “Blick Blick” by Tammi Roman’s daughter, rapper Jazz Anderson. Jazz took clapping to a whole new level when she put some unexpected fire on Coi’s backside.  Tammi’s daughter dropped the bomb on Coi just hours after “The Trendsetter” got into a tit-for-tat with her reality TV star mother.