Boosie is one of the most opinionated rappers in hip-hop. Recently, he shared his take on Kanye West’s latest controversial fashion statement. 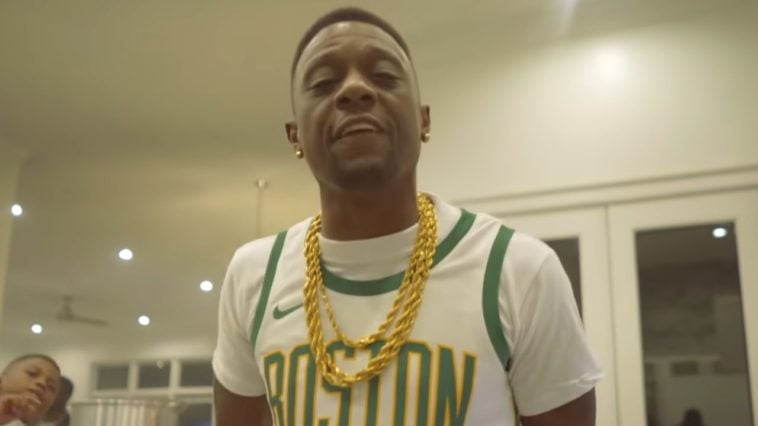 Boosie is known for his social media rants.

Recently, the Louisiana rapper had another episode when he saw Kanye’s “White Lives Matter” shirt, which he debuted at his YEEZY Season 9 presentation during Paris Fashion Week.

During an interview with Drink Champs,  Boosie was asked by co-host N.O.R.E how he felt about Ye’s controversial approach.

“Kanye is straight with me, but he pissed me off,” Boosie said. “You know what we went through and what we are still going through to this day,” he also added.

Boosie was referring to the dark history of Black people’s mistreatment in America since slavery and Jim Crow times.

Later in the video, he continued to voice his frustration with Kanye.

“Let us get our glory,” Boosie said when comparing it to Black Lives Matter. “Don’t be no f*cking pigeon stool knowing what we have suffered. Don’t put no f*cking ‘White Lives Matter’(shirt) on!” Boosie yelled.

The “Wipe Me Down” rapper ended the video by saying Kanye should “dye his face,” alluding that Kanye doesn’t want to be Black.

Celebrities and public figures such as Diddy and the Creative Director of Supreme also chimed in to give their take.

Boosie is known for voicing his opinion on a range of things, from homophobia to R.Kelly’s sentencing.

The Louisiana rapper has recently said that the Jeffrey Dahmer series on Netflix should be banned.

“This is some sick s*hit,” Boosie said about the series. Boosie also added that since the majority of Dahmer’s victims were Black, black people should boycott it.