Atlanta rapper 2 Chainz has some global sounds on his new So Help Me God album. The hip-hop heavyweight has come through with an up-close look at every song’s featured producer including Chief Keef, David Banner, Street Runner and Cool & Dre.

Deuce hopped onto his Instagram page to show off the 15-song production credits. Chainz made things even more special by sending them out a salute in the post’s caption.

“None of this could happen without these guys, at midnight tonite enjoy this time capsule masterpiece we created together! So Help Me God ✋🏾” -2 Chainz’s Instagram 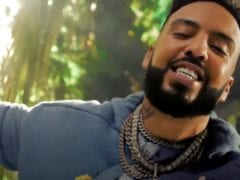 Early Thursday, Deuce took to his Instagram page with the must-listen and some must-see footage of NBA 2K21 gameplay and his tunes playing. Chainz also revealed the new songs include collaborations with rap artists Lil Uzi Vert and NBA Youngboy. Deuce went to his Instagram page Wednesday and had fans scratching their heads. Instead of giving out the traditional guest features, Chainz encouraged his followers to fill in the blanks. Fortunately, he did reveal rap stars Lil Wayne and Mulatto appear on the project since their collaborations have already been released.

“Friday! Imma let y’all figure out who the features are #SoHelpMeGod” -2 Chainz’s Instagram

According to a 2K press release, at 12:01 AM PT November 12, NBA 2K21 gamers will have access to five new Deuce songs for 24 hours within the 2K Beats in-game playlist a day before the album drops.

“I’m always looking at new ways to drop new music and connect with my fans. Premiering my music in NBA 2K21 is an incredible , exciting opportunity,” said Tauheed “2 Chainz” Epps. “Music and sports go hand in hand, rappers wanna be athletes and athletes want to be rappers. 2K has grown into a leading music platform and we wanted to bring the NBA 2K community these hits to ball out to in The City or at the 2K Beach.” NBA 2K21 on next-gen consoles represents one of the largest and most comprehensive collections of music ever assembled for a sports video game. And now NBA 2K21 is not just amassing an impressive collection, but it is bringing access to new music like never before. The NBA 2K21 industry-leading and record-breaking soundtrack is also getting an upgrade, with the next-gen version receiving 150 new tracks – an expansive addition only possible on the next-gen hardware. These 150 songs are broken up into two distinct listening experiences.