New York rapper Cardi B is defending her heritage. After R&B singer DaniLeigh recently caught heat over her “Yellow Bone” song, people have compared the two over their Dominican background.

Cardi took to social media to go off on those giving her trouble and defend her roots. She went online to Twitter to shut down all the hate and discussions about it, while explaining her heritage.

“This whole argument and me bringIng up my family tree is because for the last 4 days ya been comparing to some1 I don’t look like at all because we have the same nationality. Nationality is not a color or a race. Ya really sit here in comments arguing and don’t be makin no sense .My grandmother fully Afri Caribbean black .My grandfather was light ( my complexion) that’s why my mom is light and sunshine of her siblings are brown .AFRO CARRIBEAN EXIST !” 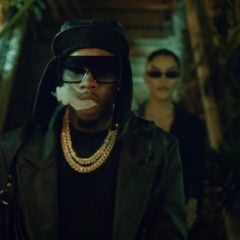 DL is genuinely sorry. After drawing a whole lot of controversy with a track she recently previewed, she’s come out and apologized in a lengthy video. DaniLeigh took to Instagram with her apologetic words. She let her thoughts be known about the “Yellow Bone” track that went viral and that she meant no harm to anybody. Dani originally apologized on Twitter, including in a now-deleted tweet that she can’t be canceled.

“Congratulations y’all gotta another thing to say about me when u hate … 👍🏽 it’s all good .. only God can “cancel”me… that sh*t don’t mean sh*t to me bc the people around me are the ones that know my heart and intention and real life … I’m sorry if I offended u .” – DaniLeigh

Dani didn’t hold back and kept things 100 with her apology. She even referenced her romantic relationship with her dark-skinned boyfriend DaBaby.

“I think people twisted it into thinking, like, I’m trying to bash another woman, another skin tone, that was never my intention. I wasn’t brought up like that, I never looked at my skin as a privilege. I never looked at me as ‘I’m better than somebody because of my skin tone. I see brown skin women flaunt their skin all the time in music, why can’t I talk about mine? If you look at me, I’m light-skinned, I’m a yellow bone. In my opinion, that’s just what I am. So, it wasn’t something that I looked at so deeply. Which, I can see why people will take it deeply, so I understand and I’m sorry that I wasn’t sensitive to the topic when I wrote my comment ‘why are you guys taking so personal?’ Because, it can be a personal thing to certain people, because colorist is a real thing so I do get it. But I’m not that. I’m not a colorist. I’m not a racist. I date a whole chocolate man. I have beautiful dark-skinned friends.” DL was facing a whole lot of criticism and dealt with it by hopping off the Internet – but then coming right back. The West Coast crooner deactivated and then reactivated a major social media account after drawing controversy with a new song preview. After catching heat and being accused of colorism for singing “yellow bone is what he wants” while previewing an unreleased song titled “Yellow Bone,” she deleted her Twitter account. She didn’t ditch it in time though, having tweeted out results of her ancestry before taking her account down. DaniLeigh has since come back online.