Reports of the Wu-Tang Clan‘s addition to Fortnite have circled around the internet. At the same time, the group has just announced their tour. 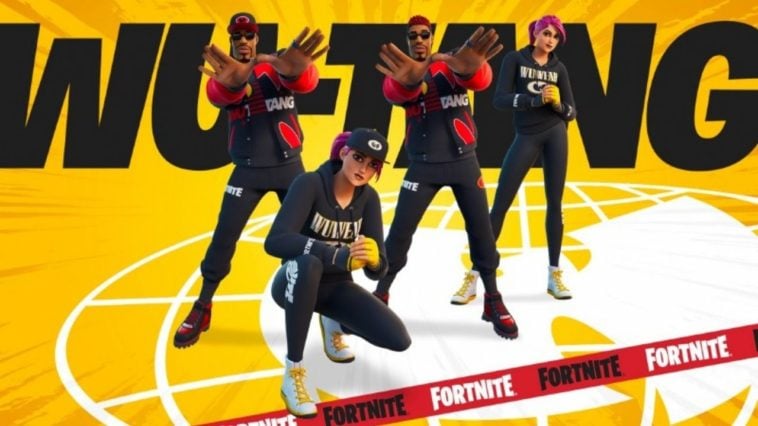 The reports of the Wu-Tang Clan’s addition to Fortnite began yesterday when insider influencer “Shiina” went on Twitter and said that “one of the most influential hip-hop groups of all time” would be coming to the game this week.

Shiina didn’t say at the time who this group might be. However, it didn’t take long to find out.

Another Fortnite insider, Fercho, shared that Wu-Tang Clan was the group that is coming to the game. Fercho also claimed to have already seen the character skins that will appear in Fortnite, but did not share the skins for fear of legal trouble.

Fortnite has collaborated with musicians, bringing Ariana Grande, Bruno Mars, and Travis Scott into the game as skins as well. Wu-Tang Clan also has a history in the video game industry, trailing back to 1999.

There have also been rumors that suggest that the hip-hop group could be working on a new RPG with Xbox.

The New York hip-hop group made up of RZA, GZA, Inspectah Deck, U-God, Ghostface Killah, Method Man, Raekwon, Masta Killa, and Cappadonna had just revealed they are going on tour in late summer of 2022.

The NY State of Mind Tour was announced with a poster that contained photos of NYC. The tour will launch the first of its 25 dates on August 30 in St. Louis, Missouri. They will then head to cities that include Toronto, Atlanta, and Houston. The Tour will culminate on October 4 in Los Angeles, California.

Tickets for the NY State Of Mind will go on sale starting April 26 at 10 a.m. EDT.

And “Wutang Is forever” will be more than a slogan with the enshrinement of their classic debut album, Enter the Wu-Tang (36 Chambers) in the United States Library of Congress. The legendary hip-hop albums are two of twenty-five recordings selected for preservation.

A Tribe Called Quest’s timeless album, The Low End Theory, and Wu-Tang Clan’s game-changing debut album, 36 Chambers, are both being added to The Library of Congress’ National Recording Registry.

The National Recording Registry announced the honor. The federal archiving agency acknowledges and preserves sound recordings that “are culturally, historically, or aesthetically significant, and/or inform or reflect life in the United States”. This is a major accomplishment and an honor for any musician.