It’s a new month, and female artists such as Saweetie, Chlöe, Jazmine Sullivan, and more are keeping the momentum. From brand deals to iconic projects, these ladies continue to take over. With new drops, new moves, and bigger bags, they show zero signs of letting up. 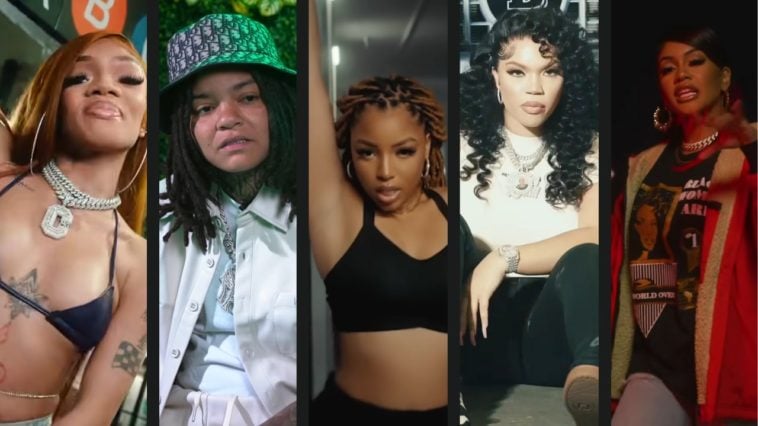 It’s been a minute since Saweetie released new music, and though she recently got caught up in some messy rumors. The Bay area artist is scrapping the B.S and focusing on her bag.  Saweetie, real name Diamonte Harper,  took to Instagram to announce her new partnership with Whiskey company Jack Daniels. This Icy Girl  is making major moves before the new year!

Fans are no longer mentioning an album when it comes to Chlöe Bailey, but make sure to support her every move. The “Treat Me” singer continues to keep her name ringing bells throughout the music industry with partnerships and iconic single releases. Chlöe recently showed off her angelic vocals as she sang the National Anthem at the World Series Game in Philly.  Ms. Bailey keeps the bag flowing, scoring a brand deal with the Italian designer brand Fendi.

After sending fans into a frenzy this week, Young M.A. proves she’s indeed pregnant with a new project.  The New York rapper announced a new reality show, “Bad Vs. Boujee,” which will make its way to fans’ TV screens soon.

GloRilla is taking over the music scene one track at a time. After being named On Vevo’s “DSCVR Artists To Watch” For 2023, the Memphis rapper caught the eye of R&B singer Ciara.

Now, Glo can be heard on the “Better Thangs” Remix alongside Summer Walker and Cici–the track is fire!

Renni is proving she’s more than “Foogiano’s Ex-Girlfriend.” She got bars, and she’s not holding back. The Southern female rapper teamed up with 4 Shooters Only, to give a live performance From the Block.

The hit track “Texture” gives real “Queen of the South” flow, and fans love it!

Flo Is The Future

The emerging girl group, Flo continues to make a buzz in the music scene, having many wanting to know who they are. The hot British group was one of many artists named on Vevo’s “DSCVR artists to watch” in 2023.

Now gracing the cover of Essence magazine, these ladies may have been working behind the scenes, but now it’s their time to shine!

After dropping her latest single, “ICU,” Coco Jones is taking it up a notch this week by releasing her debut EP “What I didn’t Tell You.”

The South Carolina artist devoured and delivered hit after hit on this project and fans are more than proud of Coco for finally getting the recognition, and becoming the mega star she deserves to be. We see you sis!

It’s been two months since Tink graced fans with her timeless project “Pillow Talk” and we’re still listening to it.

The Chicago native is back with another live session, performing the hit track “Switch.” Her live vocals prove she’s undeniably unmatched and It’s safe to say, we’re ready for a tour!

No Matter what is thrown at Meg, she always remains on top. Thee Stallion teamed up with Amazon Music to give fans an epic night. The H-Town Hottie performed hit tracks “Pressurelious,” “Simon Says,” WAP,” and “Freak Nasty.”

Chlöe wasn’t the only one who had the chance to sing the national anthem at the World Series. Sultry songstress Jazmine Sullivan also graced the world with her divine vocals as she put her spin on  “The Star-Spangled Banner.”

KaMillion Signs With UTA in All Areas

Rap Sh!t star KaMillion is making money moves in all areas in the industry. The Florida rapper recently signed a new deal with top agency company UTA, covering all aspects in film, television, and music. Congratulations sis!  You’re on your way to mogul status in the entertainment industry.

Enjoy the new music this weekend SOHH family, and be inspired to take it up a notch in all aspects of life!