The NFL Super Bowl halftime show musical performers have been announced and it’s looking like a must-see event is in the making featuring Dr. Dre, Snoop Dogg, Kendrick Lamar, Eminem, and Mary J. Blige. But with the NFL’s complicated history towards protests against police brutality, the lineup has fans wondering if shots or reconciliation will be on the agenda. 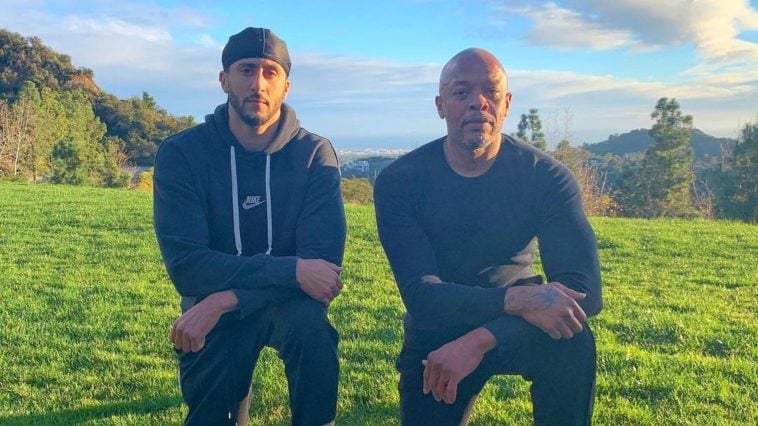 The NFL and half-time show producer Roc Nation announced Thursday that the stellar lineup for the LVI Super Bowl Halftime Show will include Dr. Dre, Snoop Dogg, Eminem, Mary J. Blige, and Kendrick Lamar.  The unusual superstar roster will perform live for the first time together from SoFi Stadium in Los Angeles on Feb. 13th.

The NFL hired RocNation to mend its battered reputation after their battle with Colin Kapernick over his in-game protests that were distorted by the media as “anti-police.”   But Jay-Z’s curated lineup has fans scratching their heads as each of the artists (except Mary J. Blige) have all had a history of “anti-police” or “anti-establishment” rhetoric.

Kendrick Lamar was criticized on Fox News for his powerful performance of  “Alright” — citing the lyrics “…And we hate po-po, wanna kill us dead in the streets fo sho” while standing atop a vandalized police car at the 2015 BET Awards.

Who can forget Dr. Dre’s role as the key frontman of N.W.A. whose most famous hit “F*** Tha Police,” had the group on the CIA’s watchlist.

Eminem is quoted as saying “…Prayers to George Floyd and Ahmaud Arbery, how the fuck is it that so many cops are dirty…” on his racial justice rant with Kid Cudi, The Adventures of Moon Man and Slim Shady.

And on Snoop’s breakout single off the “Deep Cover” movie soundtrack, he croons “It’s 187 on an undercover cop.”

Fans and critics are left wondering why such artists would align themselves with the NFL, an organization that didn’t support Colin Kaepernick when he bent a knee to protest police brutality.

Will the Superbowl show usher in an opportunity for healing and reconciliation between racial justice activists and the NFL?

Will the conversation around dinner tables and Zoom calls the next day be focused on bridging the gaps that divide us?

Will the half-time show reignite support for the George Floyd policing bill that is still languishing in the Senate?

Or will these important artists-activists avoid political sentiments altogether and just entertain us with a show-stopping performance?

With Jay-Z and his label Roc Nation on board as the NFL’s “strategic entertainment advisors,” we can only be certain that either way, the show will be groundbreaking. Juvenile’s Standing Strong Behind You Vaxing ‘That Thang Up’